NINA AND SPLASH FIGURINES HAVE ARRIVED! 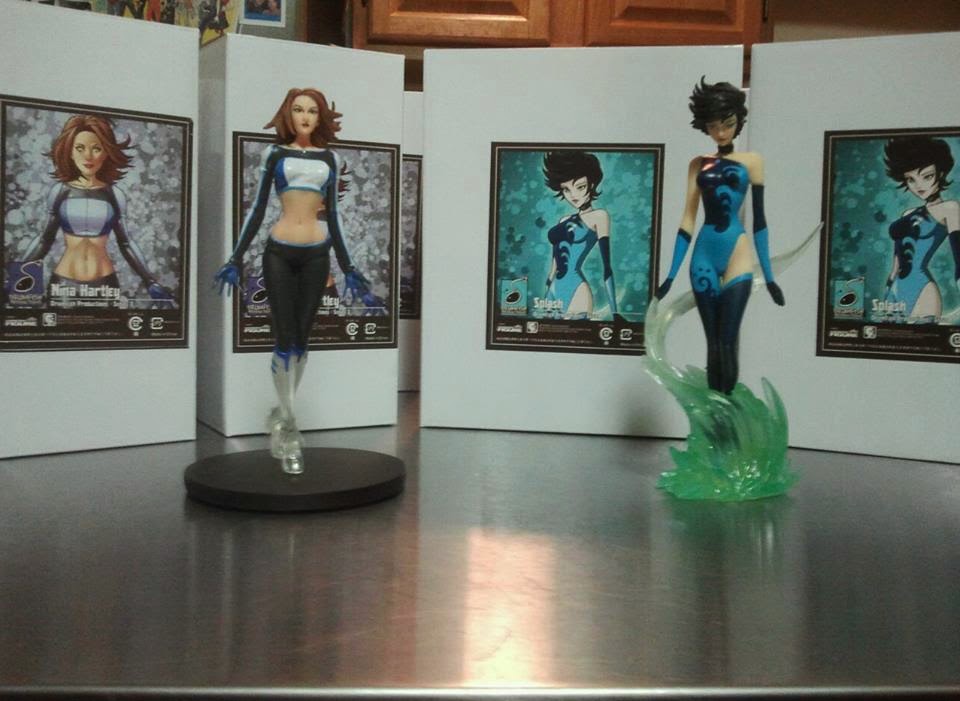 Finally! Our third set of Drumfish figurines have arrived! Nina and Splash look amazing and we're extremely happy with how they turned out.I'll be contacting everyone who wrote wanting a copy soon. And for anyone else interested in the new figurines (or any of the previous ones!) note me here or contact me via the Drumfish Facebook page.
Nina designed by Jamie Fay (colors by Danielle Alexis St. Pierre)
Splash designed by Luciano Vecchio
Nina and Splash (c) Drumfish Productions
Posted by Rich B. at 8:03 AM No comments:

This past weekend I attended Megacon in Florida along with NEVERMINDS artist, Jamie Fay! We love this convention and look forward to it each year. This year in particular, we REALLY wanted to visit Florida because the winter in NYC has been extreme! I don’t think I’ve ever seen a winter with so much snow since I moved to NYC over 20 years ago! It’s been crazy. So, getting to relax in the sun and warmth was amazing! Megacon was in a different hall this year and the layout was also slightly different. I was told different reasons why this was, but it was obvious to me there were a lot more people at the convention this year. So, maybe that had something to do with it too? Whatever the reasons, it was an exciting show! Friday, the first day was a little slow for me, but Jamie had his commission list filled within the first hour. He was banging out some amazing sketches the entire weekend and had to turn people away due to so many requests. On Saturday and Sunday, I was slammed busy and sold out of all Sentinels and Neverminds books that we had brought. Bugged wasn’t as big a seller, but it’s a different type of story and can be a bit much for some people because it falls under a more mature theme. But my prints were selling incredibly well and I was very happy that people enjoyed them too! I want to thank all the old and new friends we have made at Megacon. We really love interacting with fans and talking comics with everyone. I especially want to thank Andrew, Kam, Korey and Stacey for stopping by and always being such big supporters of Drumfish and special thanks to David and Todd for helping with the heavy boxes of books I sent to them before the show! 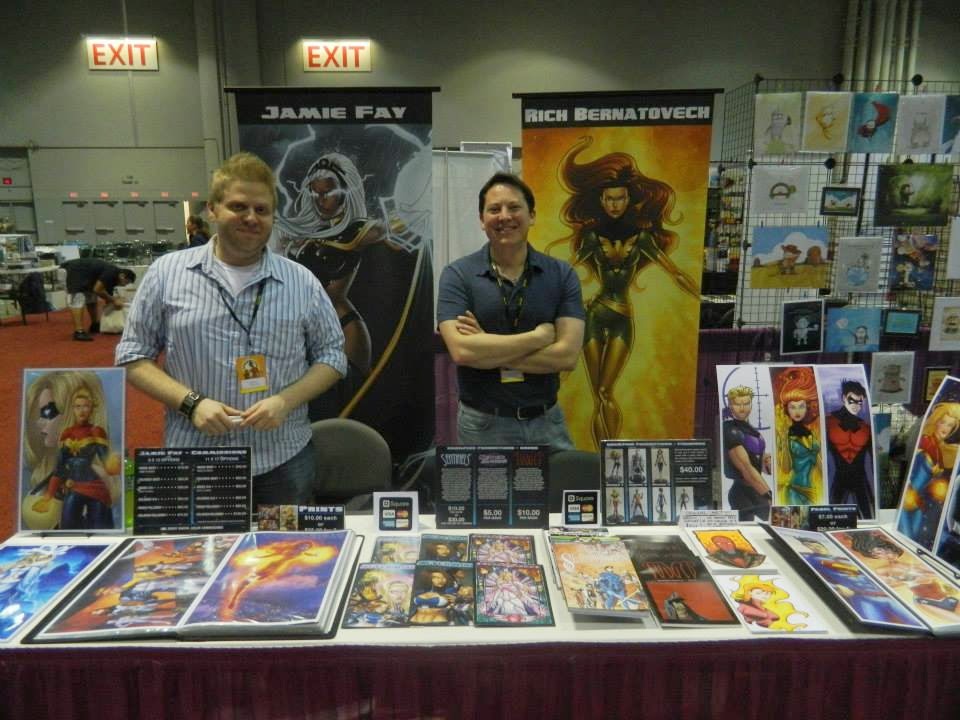 Here's a cute picture of a girl cosplaying as Death (from DC Comic's Sandman series) holding my Death print that she bought from me. 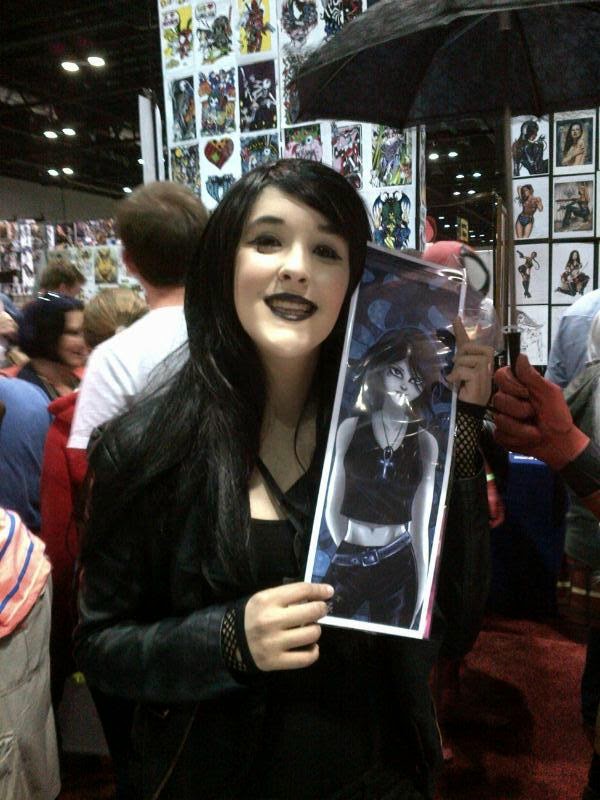 Our next show is Awesome Con in Washington D.C.! We hope to see you there.
Posted by Rich B. at 7:57 AM No comments: 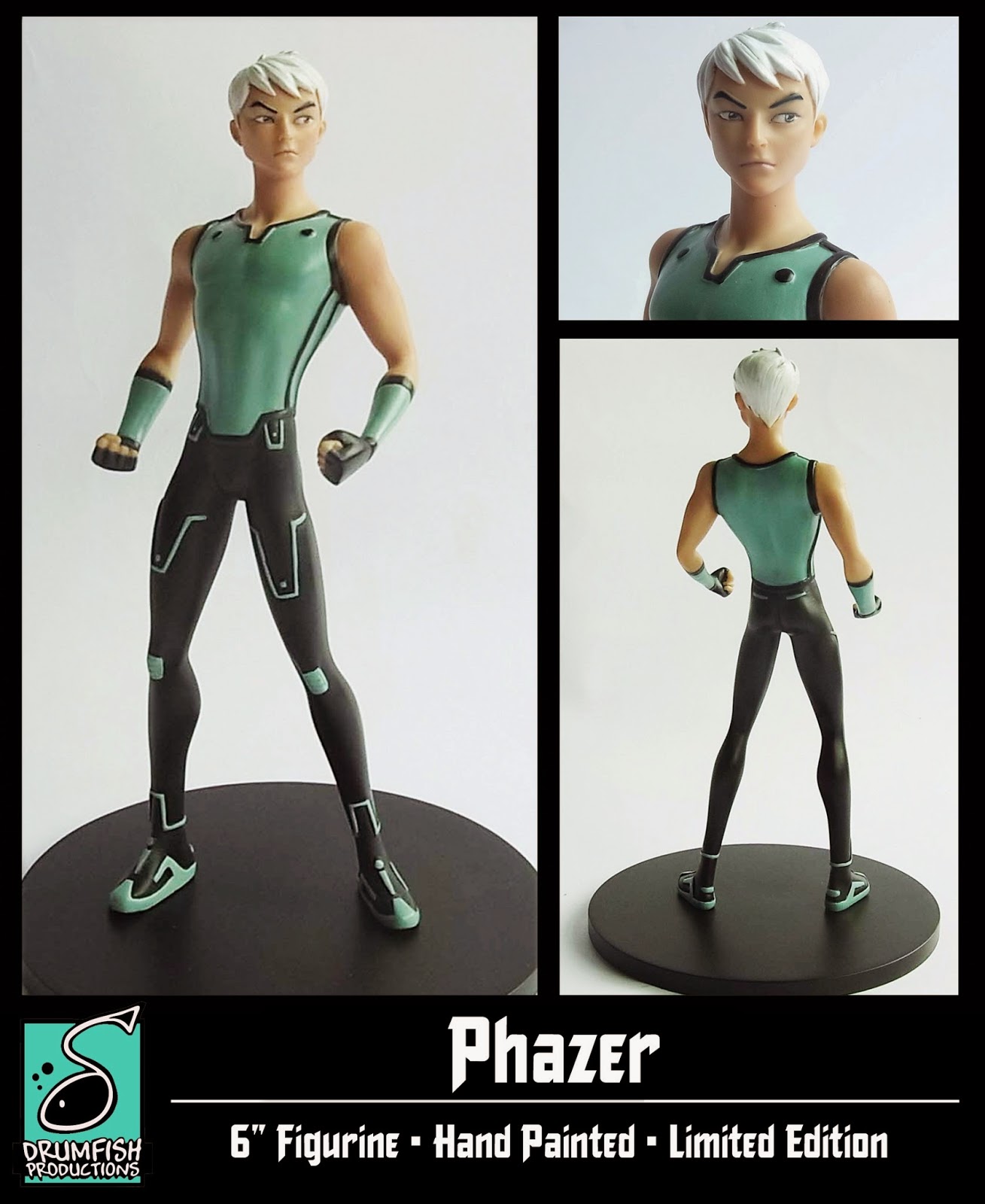 The painted prototype of Phazer from our figurine series has arrived and he look awesome! As fans of SENTINELS know, Phazer is the heart of the team and we had a lot of requests for him as a figurine. We were lucky to get the company who has been making our figurines to add him to our series quickly and we expect him to be shipped to us next month along with the (long awaited!) Nina and Splash figurines. Designed by SENTINELS artist, Luciano Vecchio, Phazer is hand painted and stands 6" tall. And just like the rest of our figurines, he comes with a box and base that has his name and comic series on it. The cost of the figurine is $40 and shipping varies depending on your location. Please contact us or check out the Drumfish Productions store for ordering info!
Phazer and Sentinels (c) Drumfish Productions
Posted by Rich B. at 11:07 AM No comments:

Here are three new prints I'll have at conventions this year. Done in my panel art style, Hawkeye and Batwoman were colored expertly by Danny Morales. Danny has been coloring my recent Avengers pieces and I love his work. I hope to work with him more in the future and look forward to seeing what he does next! And Dark Phoenix was colored by NEVERMINDS colorist, Danielle Alexis St. Pierre as a surprise for me! It's well known that Danielle is an amazing colorist and is already in high demand. I'm a lucky man to work with so many kind and talented artists! Thanks, Danielle and Danny!

I've only been able to get three X-Men characters drawn in my panel art style so far (I plan to do a lot more!). But the three I've done look AMAZING when colored by Nicolas Chapuis! Nic did a terrific job in such short time. I was totally impressed and happy with the results of his work! Check out Gambit, Phoenix and Storm colored by Nic and see more of his work here!

Gambit, Phoenix and Storm (c) Marvel Comics
Posted by Rich B. at 7:27 AM No comments:

This is really amazing! CNBC just posted a story about Comixology and and mentioned Drumfish Productions and our SENTINELS and NEVERMINDS series! Huge thanks to Tom DiChristopher for the interview and mention! Check it out here!
Posted by Rich B. at 6:16 AM No comments:

Here's the colored version of my panel style print of Death from DC Comics' Sandman series. She's a great character and I love her visual. I was lucky enough to have Crystal Joy Rose color her for me super fast and in time for Megacon in Florida! I think she did an AMAZING job! Thanks, Crystal!

Since Comixology opened their doors to independent comic publishers to submit and be available on their website for digital distribution, many sites have been reviewing some of the independent titles each week. One of those site is ign.com. This past week, NEVERMINDS was fortunate enough to be picked for review (for issue #2) and we were very happy to read that they got what we were setting up within the series. We got the best mark of the week for independent titles (an "A") and a great quote "You should be reading this." fro reviewer, Shawn Denney. Check out the review at the bottom of the page here.
Posted by Rich B. at 7:59 AM No comments:

NEVERMINDS #2 AVAILABLE ON COMIXOLOGY FOR ONLY .99 CENTS!

We're proud to announce that NEVERMINDS #2 is now available digitally on Comixology for only .99 cents! Issue #2 joins our first issue of the series and is written by me (Rich Bernatovech), pencilled and inked by Jamie Fay and colored by Danielle Alexis St. Pierre. Check out the issue HERE!
And if you've already read and enjoyed the book, please leave some feedback on the Comixology site. It really helps to spread the word! 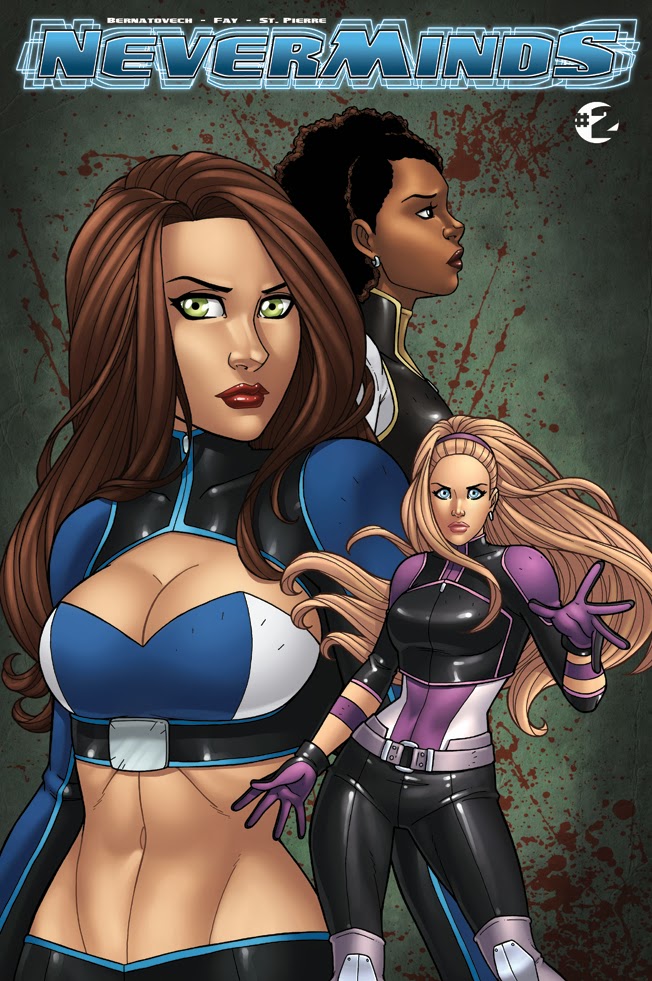 Okay, I'm a fan of Ironman's, but I totally hate drawing him, lol. He's one of those characters that you have to get just right to make him look good. Luckily for me, Danny Morales Colorist﻿ took my line art and made this pic of Ironman look soooo much better than it was. I'm blown away by the amazing job he did.  Thanks, Danny!!

Ironman (c) Marvel Comics
Posted by Rich B. at 7:07 AM No comments: