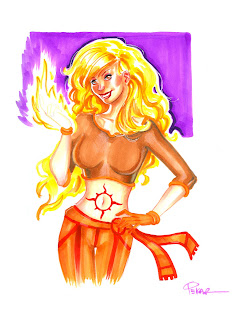 One of my favorite artist to get something by at conventions is Joe Pekar. This sketch of Firebomb from SENTINELS was done at the 2011 Pittsburgh Comicon and was done in addition to the Rapture pic I posted a while back. Joe is always drawing away at Cons and has a long list. Seeing his work, that's no surprise. His female rendition of characters are always amazing! I also love the way Joe colors and even though it looks like he's using watercolors, this is all done with markers! Please check out more of Joe's work at http://www.joepekar.com/ .
Posted by Rich B. at 7:24 AM No comments:

Here are a few headshot sketches I forgot to post. Don't have much time to write on here today, so I figured this would work as something fun to see. 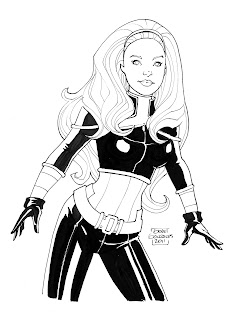 Here's another of the great sketches I got at the 2011 Pittsburgh Comicon. This sketch of Alanis Munroe from NEVERMINDS was drawn by Gene Gonzales. I love Gene's clean and smooth style and his linework is perfect! Gene excels at drawing beautiful women and as you can see here, he did an amazing job on Alanis. On top of being such a great artist, Gene is a super nice guy and very friendly. He seems to love what he does, and how could he not when he's so good! Check out more of Gene's work at http://www.genegonzales.blogspot.com/ .
Posted by Rich B. at 6:35 AM 3 comments: 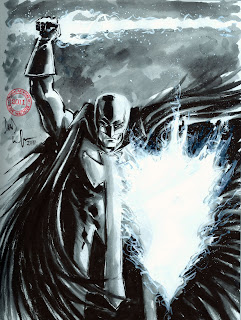 I truly LOVE this sketch of the first Gen SENTINELS leader, Templar, drawn by Dave Watcher at the 2011 Pittsburgh Comicon. Dave always puts so much time and energy in to each of the sketches he does at conventions and it really shows here. Something that really impresses me in this sketch is that it's in black and white yet has a feel of color around his sword and shield. I also love how much this looks like a painting. Anyone who catches Dave at a convention shouldn't think twice about getting a sketch from him, it impossible for him to do a bad sketch! This year, Dave's talent was recognized (along with co-creator, James Andrew Clark) with an Eisner award nomination for his webcomic "The Guns of Shadow Valley" http://www.gunsofshadowvalley.com/ . I hope they win! Check out more of Dave's work at http://www.davedrawscomics.com/ .
Posted by Rich B. at 6:31 AM No comments: 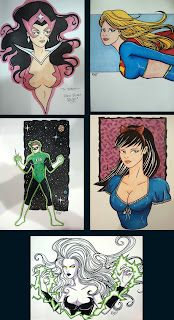 Wizard World Philly was a mixture of good and bad. Overall, the Con was great! The attendance was very high and the crowd was super nice and enthusiastic. But what made for a semi-difficult convention was the organization. The Con was run horribly. People were waiting outside in line for hours from what I was told. Apparently, they sold a HUGE amount of "one day" tickets, but I was told by someone that there was no date on them and everyone seemed to pick Saturday for their "one day" which leads to a wait getting in. Not sure if that is true or not, but it was packed Saturday. In addition to that, Artist Alley was a complete mess. Names of people were not on programs (a sheet of paper handed out at the door) or on all tables. Certain people were allowed to set up wherever they wanted and the people who originally had the spot were moved. We never got badges even after being told they would bring them to us two days in a row. Same with name banners on table. It was just overall a mess in terms of treatment and organization.
On the plus side though, the crowd and other artists really helped make this a great show. All around people seemed to be in good spirits and feedback on NEVERMINDS has been great! We sold all of the copies we had except three. And I also sold all the sets of SENTINELS that I brought except one. I always love when I can go home with little to no books, lol. It was great! I also sold a lot of my pre-made headshot sketches and did 5 commissions (shown with this post) at the show. I'm getting more confident with my art and have been able to draw more while at the table. This is something I've been trying to work on for a while now. Hopefully, I'll keep getting better at it. It was great seeing old friends and making new ones. I really appreciate everyone who stopped by to say hello! I don't know what it is about Philly, but everyone is always super nice. I even ran into three fellow Tyler School of Art alumni who were sitting behind me. I think there ended up being six graduates from there at the show. It was great to see others who went to the same school as me selling their work. I really enjoy attending this convention and hope that next year they organize it better! Again, HUGE thanks to everyone who stopped by and supported us. We couldn't (and wouldn't) do it without you all!
Posted by Rich B. at 7:22 AM 2 comments:

I'll be at Wizard World Philly this weekend at table# 1705 with NEVERMINDS artist, Jamie Fay. We'll have NEVERMINDS #1 and all 5 SENTINELS trades. I’ll also have copies of my sketchbook and our collab comic COMICON ON MONSTER ISLAND.
Jamie will be selling prints and doing commissions and I'll also be selling my colored headshot sketches and doing commissions!
Stop by and say hello!
Posted by Rich B. at 6:35 AM No comments: 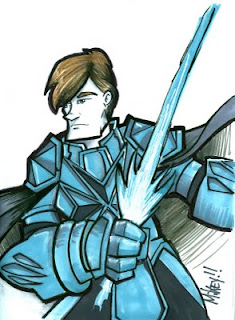 Here's another of the great sketches I got at the 2011 Pittsburgh Comicon. This sketch of Templar, in his costume from SENTINELS Book 4: Hope, was drawn by friend and talented artist, Mikey Wood. Mikey is always drawing up a storm at conventions and his energetic and animated style really shines in his art. I love the way he add color to his pieces too. Mikey draws the uber cool comic "Hate your Friends" and "Love in a Time of Super Heroes. Check out more of Mikey's work at www.facebook.com/SpaceMonkeyComics .
Posted by Rich B. at 6:46 AM No comments: 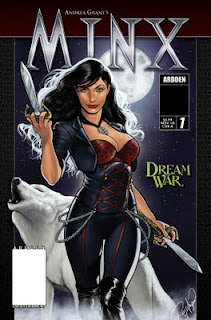 It's been a while since I've done a "read it" plug on here (September 2010 to be exact, lol), but I have been reading a lot of new books that I really enjoy and want to share them with people. The first of which is Andrea Grant's "Minx". I've known Andrea for a long time now and when she started I was able to give her whatever advice I could. She didn't need much though, because she hit the ground running when she started and published her first issue of Minx. It wasn't long after the first original issue #1 came out that Andrea met NEVERMINDS colorist and super-artist, Rey Arzeno. After working with him for a while, Andrea decided to revamp Minx and start over. This time with Rey as the artist and publishing through a new company called Ardden. The results are really amazing and the story and art have never been better. Filled with supernatural and Native American themes, Minx is a unique and interesting start to what I believe will be an exciting story. The main character awakes after being in a coma, only to find much time has passed and things are no longer the same. She is torn between the real world we all live in and the dream world where she spent so much time. Rey's beautiful rendition of the title character (and writer) is on the level of Adam Hughes and Terry Dodson in my opinion. I'm sure before he knows it, Rey will be drawing a book for DC and Marvel (just like I predicted for Luciano and Jamie, lol. And Luciano already is!). I believe comics need more strong female characters who have their own books and Minx is definitely one of those. Find out more about Minx at www.copiousamounts.com/minx .
Posted by Rich B. at 7:03 AM 4 comments:

I haven't been able to do as much drawing as I'd like to lately, but here are a few new headshots in preparation for next weeks Wizard World Philly Con. I was on an X-Men kick because of the movie, lol. I have a few commissions to complete before the convention too. Staying busy!! 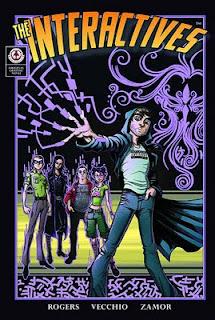 SENTINELS artist extraordinaire has another new project coming out, Interactives. Written by UK writer, Peter Rogers, Luciano brings to life the OGN describe like this: "The public is obsessed with reality and the creatures from fantasy fiction fear extinction. Dragons, giants, orcs, goblins, and trolls - one by one they're breaking through from The Realm to The Real. War is coming to London and only geek blogger scallywag and his online followers stand in their way. Let your imagination run wild and get ready for some action!" I've seen a few pages and in typical Luciano fashion, he excels at creating a believable and interesting world with lots of detail and character development. But anyone who knows Luciano's work knows that he's not capable of doing anything otherwise. Interactives is available for pre-order through Diamond Comic Distributors and other sites. Check it out by googling 'Luciano Vecchio' and 'Interactives', lots of ordering sites will pop up!
Posted by Rich B. at 6:34 AM No comments:

HARLETTE AND ALANIS BY ERIC KODA 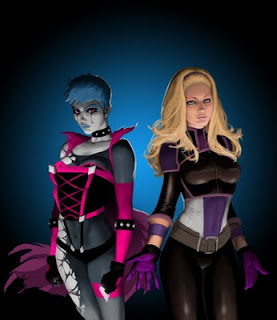 Check out this amazing drawing by Eric Koda of Harlette from SENTINELS and Alanis Munroe from NEVERMINDS. This sketch was gotten by Jamie Fay through Deviant Art and it's the first time characters from both of Drumfish Productions books have been drawn together. Cool, huh? I really love Eric realistic style and coloring technique. His work is truly beautiful. See more of Eric's art at http://www.executiveorder9066.deviantart.com/ .
Posted by Rich B. at 5:10 AM 5 comments: 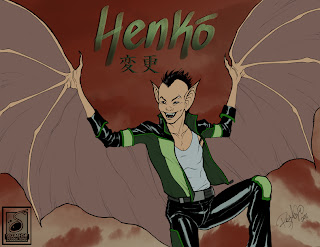 Here's a fun sketch of Henko from NEVERMINDS drawn by NEVERMINDS colorist, Rey Arzeno. Henko is a fun and interesting character we're developing and, as a writer, it's cool to see sketches like this from the artists. It helps me make decisions about what does and doesn't work for the character. I'm not sure how many people are familar with BatBoy, but this sketch was inspired by that. Rey is always doing funny things like this, it's part of his charm, lol.
Posted by Rich B. at 6:57 AM 2 comments: