Here is a preview page of the SENTINELS appearance in ARGO 5 #3! The link below is the ordering page for the issue and has some preview pages on it including this one. So, I figured it was okay to show here. 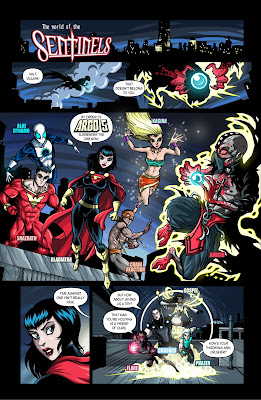 http://www.indyplanet.com/store/product_info.php?products_id=5242
Posted by Rich B. at 7:34 PM No comments: 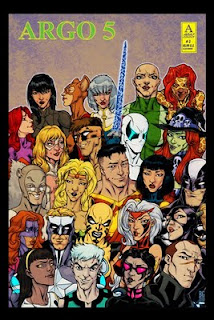 I'm extremely proud to announce that we have some new SENTINELS material coming out next week! Yup, that's right, brand new SENTINELS work by myself and Luciano Vecchio will be appearing in the next issue of Dan Sehn's ARGO 5 comic (Issue #3). I met Dan way back when I first started SENTINELS at one of the Big Apple Comic Cons in NYC. I immediately loved Dan's work and thought that his comic was full of excitement and energy. So, when he asked Luciano and I to be involved in a cross-over issue he was planning, of course we said yes! To make things even better, this issue is dedicated to Pat Carlucci and features some of his awesome characters. Anyone who knew Pat, knows what a great guy and talented artist he was, so I'm really honored to be involved in this project. Dan even received Dawn Carlucci's blessing on this cross-over. Next to this post is the cover for the issue and you can see the SENTINELS on the bottom row. Pictured are Gospel, Phazer, Flare and Crusher. This story is in SENTINELS continuity and takes place a while after SENTINELS Book 4: Hope and before the first SENTINELS Anthology. It even features another character from the book not pictured here. The issue will make it's premiere at the CGS Supershow next weekend (April 30-May 1, 2011). We won't be able to make the show, but we encourage anyone attending to stop by Dan's table and pick up a copy. Or if you can't make it, you can purchase a copy of the issue at http://www.indyplanet.com/store/product_info.php?products_id=5242 . 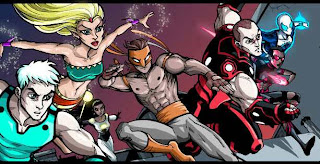 Here is a preview panel from the 4 pages that Luciano and I did for the book. Enjoy! :) 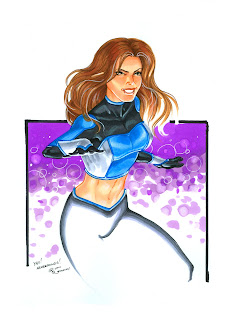 I'm hoping that this amazing sketch of Nina from NEVERMINDS drawn by Rhiannon Owens will make up for the lack of posts I've been making recently. I first met Rhiannon at the 2008 Megacon in Florida and have been a fan ever since. I'm not sure what caught my attention first, her amazing art or the hugeeeee mohawk that she had her hair pulled up into. Seriously, her mohawk stands out at conventions and you can't help but notice. And that's saying something considering Megacon is known for how many people dress up in costume, lol. But all kidding aside, the moment I saw her art and began talking to her, I was wowed by Rhiannon. Not only is she super nice and funny, but her art is extremely detailed and energetic. If you ever have the chance to get a sketch from her at any convention, do it! She never let's people down with her commissions. Trust me, just look at this one! Check out more of Rhiannon's work at http://www.studiorhi.com/ and http://dangerous-beauty778.deviantart.com/ .

And just a quick note, to see some of the awesome sketches I've gotten early before I post them here or to see other things that aren't on the blog, be sure to follow us on the Drumfish Productions Facebook page!
Posted by Rich B. at 6:59 AM No comments: 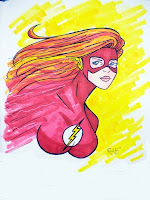 Wow! I don't think I've ever had a convention fly by as fast as this past weekend's 2011 Pittsburgh Comicon. Seriously, it felt like it we had just gotten there and then we were leaving. The best thing about the Pittsburgh Comicon is and has always been the people there. Great friends selling their stuff and great people attending the show. I want to thank everyone for making the Con so much fun. We sold out of the first issue of NEVERMINDS! I didn't even realize how many copies we'd sold until we were packing up. I hope everyone who purchased the book enjoys it and please, feel free to let us know what you thought - either on here, on the Drumfish forums or by email. We love reading your comments. 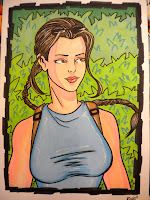 We arrived Thursday night and our buddy, Big Al (Al Dorantes), threw his usual pre-show party in the penthouse of the hotel. Everyone had a great time and Al bought tiles for people to draw on and donate for the "Make-A-Wish" charity auction. It's always nice to have this pre-show catch-up time with follow creators and everyone seemed to have a blast. (Some a little too much, cough-cough, Ziggy!). 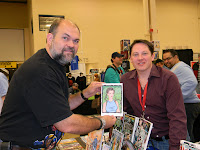 The first day of the Con was really, really slow. That's usually the case here, but it seemed even slower than in the past. Still, we did do some good business and it gave me some time to get some amazing sketches (which I'll be posting soon!). 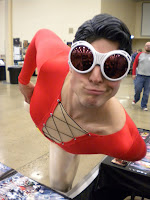 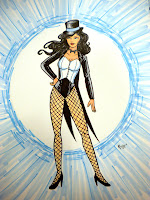 Saturday was a busy day and I was surprised that even I was asked to do a few commissions. This is only the third convention I've done where I've been offering to do commissions. I did two at the NYC Comicon, three at Megacon and this time I did a whopping SIX commissions over the weekend. Cool, huh? I only got a picture of four of them, but maybe the people who bought the other two will post them somewhere and I'll be able to get a copy. I have to admit, I'm still not totally comfortable doing commission at the table. Mainly because I don't want to be one of those people at the table with their head down and ignoring customers. But I seemed to be able to balance it okay this time. Maybe I'm learning to adapt, lol. Anyway, Saturday was the best day for everyone and they seemed to do good business. 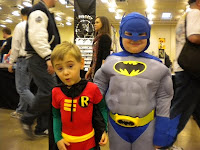 Sunday was a weird day. It was slow and there weren't a lot of people walking around, but surprisingly, I still sold a bunch. We got a lot of NEVERMINDS sales. I also won the George Perez raffle and got a kickass sketch of Alanis from NEVERMINDS and in addition to that, I got a FREE sketch by Phil Jimenez! He drew Electron from SENTINELS. Needless to say, I was a happy guy on Sunday. To make things even better, both George and Phil stopped by our table later in the day. George came over and told me how proud he was of the work I've done and seeing me get my second series off the ground. WooHoo!! And then Phil stopped over and also had many nice things to say. 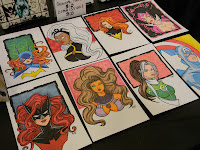 All in all, even though attendance was down, I still did well and the Pittsburgh Comicon is still one of my favorite conventions. I really want to thank all the great people we met there for the first time this weekend, all the old fans we got to catch up with, all the artist I got sketches from and of course all my follow creators. You guys are the best! 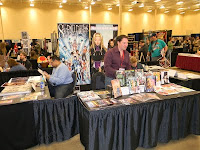 Updated!: Just saw another of the commissions I did posted on Facebook! I drew the blue girl on the left. :) 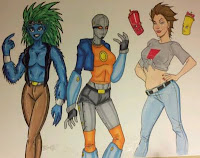 This weekend (April 15-17) I'll be at the 2011 Pittsburgh Comicon! I'll be there along with Jamie Fay and Rey Arzeno. We'll have all 5 SENTINELS books and the first issue of NEVERMINDS! I'll also have tons of pre-made sketches and be doing commissions. For anyone going to the convention, stop by and say hello!

Sorry that I haven't had time to post much. Work and the puppy have been keeping me busy! I'll be at the Pittsburgh Comicon this coming weekend and in preparation for that, I've been trying to get a bunch of pre-made headshots done. Some of them turned out pretty cool I think. I'll post more about Pittsburgh later in the week and hopefully after next weekend, I'll be posting a lot more on here. Lots of interesting stuff brewing! 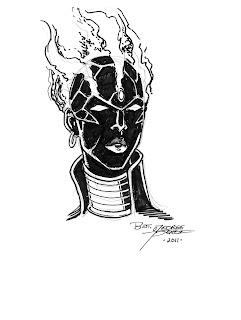 It's been a while since I've gotten any sketches and at this year's 2011 Megacon I only got five. It's sometimes a lot of work to try to get sketches and the last few conventions I've really just stuck to the artists sitting around me. I really enjoy getting the unknown artists to draw something for me. Their work is every bit as great as well known artists most of the time, except they just haven't gotten a break yet. That said, lol, I still do seek out the big names and there's no bigger name in my book than George Perez! I decided to enter the lottery George has each day of the convention to try to get a headshot sketch from him. Luckily for me, I won the last spot on Friday. In the past, I've been fortunate enough to have gotten George to draw the main SENTINELS team, so I figured I'd switch it up and ask him to do one of the members of NEVERMINDS. I really love his version of Samanya. She looks so tough!
Posted by Rich B. at 6:56 AM 3 comments: 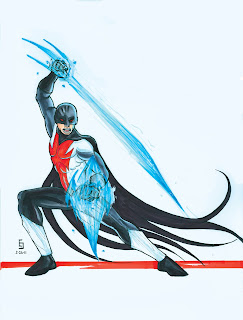 Before I start posting sketches I got at the 2011 Megacon, I wanted to post these two amazing drawing that were done by Eric Guerrero. They were done back in February and both were done as birthday gifts for myself and NEVERMINDS artist, Jamie Fay. Eric draw Templar (from SENTINELS in his revised colored costume) for me and Alanis Munroe (from NEVERMINDS) for Jamie. How cool is that? Please check out Eric's work at http://cirgy.deviantart.com/ . Thanks again, Eric!! 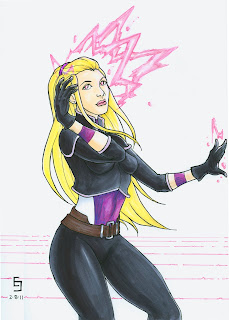 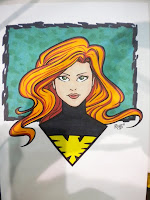 Whew...What a weekend we had at Megacon in Florida! It's almost a week later and I'm still exhausted, lol. It's been a while since we attended this convention and I think that was a good thing. Perhaps we will skip a year or two going there, because I did really well at this Con. We sold close to 100 books! Half of that was the first issue of our new series NEVERMINDS and I'm really happy with the reaction we've been getting from people. Thank you to all who stopped by and picked up a copy and/or the SENTINELS series.

There were so many interesting people at this Con that it made the entire show fly by. In addition to selling so many books, Jamie Fay sold out of almost all the prints he brought and even had to take commissions back to the hotel at night to finish them. Another cool thing for me, and what made this convention even better, was that I also sold 27 pieces of art! Crazy, huh? lol. I even did 3 commissions while there! One of them of one of the characters from NEVERMINDS (Nina). I don't normally do commissions, because I'm not usually able to focus and handle the table as well as draw. But, I was having fun and was able to handle it all, so I took 3 commissions (you can see them below). All in all, Megacon was a great success and I really want to thank everyone who stopped by our table. It was great talking to you all. Also, I want to thank Todd and David for all their help. You guys are the best! Now, check out some of the awesome costumes from Megacon below. 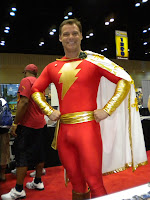 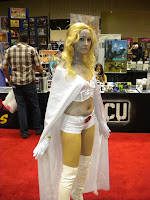 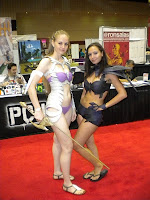 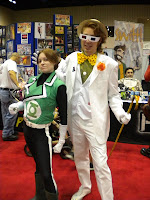 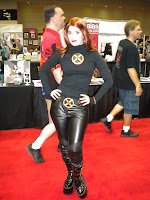 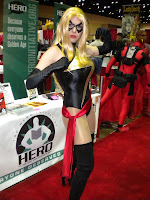 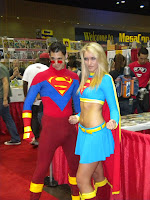 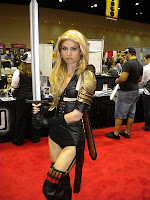 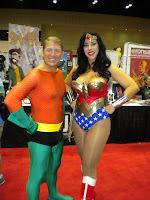 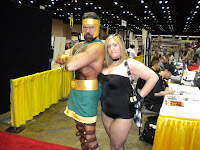 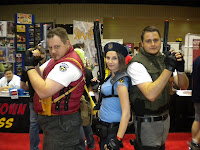