MEREDITH GRACE AS NINA FROM NEVERMINDS! 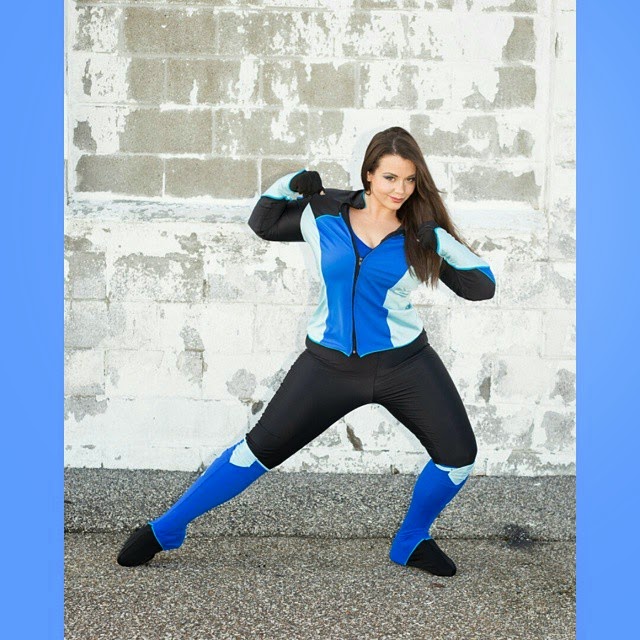 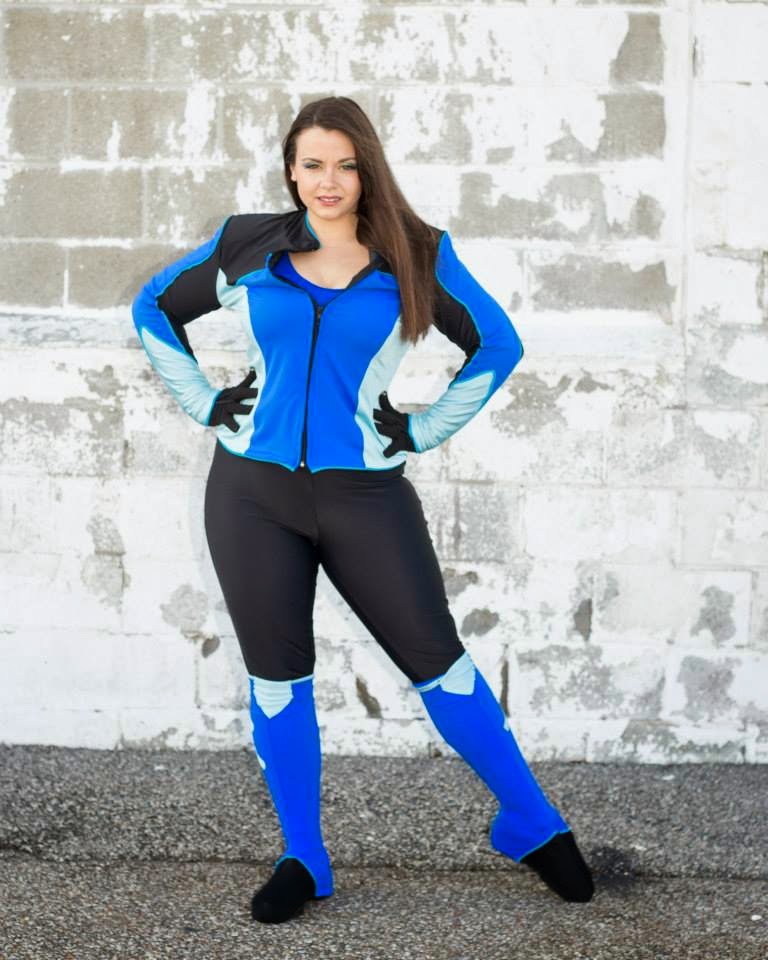 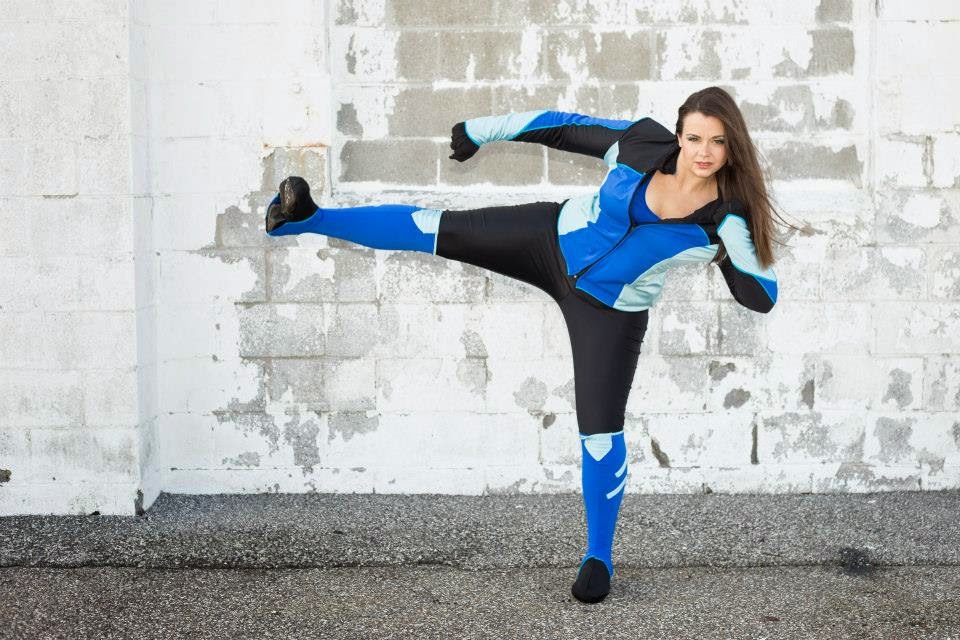 Meredith Grace did this amazing cosplay of Nina from NEVERMINDS! We were surprised when we saw Meredith was making a Nina costume and totally floored by the final version! The detail and energy she put into it is really great! There are few words to describe seeing someone cosplay as your character. It's a great feeling! Especially when they look so great! Thank you for sharing, Meredith
Please check out more of Meredith's great cosplay on her Facebook page here!
Posted by Rich B. at 12:31 PM No comments:

This is my first time drawing Groot and Rocket Raccoon from Guardians of the Galaxy! I gotta say, I love these characters and drawing them was really fun. Of course, Danny Morales did his magic on this and colored them amazingly! Thanks, Danny!

Groot, Rocket Raccoon and Guardians of the Galaxy (c) Marvel Comics
Posted by Rich B. at 12:09 PM No comments:

It feels like I haven't posted any new art that I've done in a long time. But that doesn't mean that I haven't been working on a lot of stuff. We're close to completing the 2nd SENTINELS Anthology and I'll be hitting a few conventions starting next month. In anticipation of that, I'm working on some of my new panel style prints. After seeing the Maleficent movie, I remembered how cool a character she was, so I had to draw her. Of course she would never look so good here unless Danielle Alexis St. Pierre had colored her! What can I say about Danielle's coloring that I haven't said a ton of times before? She's an AMAZING artist! Thanks so much for coloring this for me, Danielle! 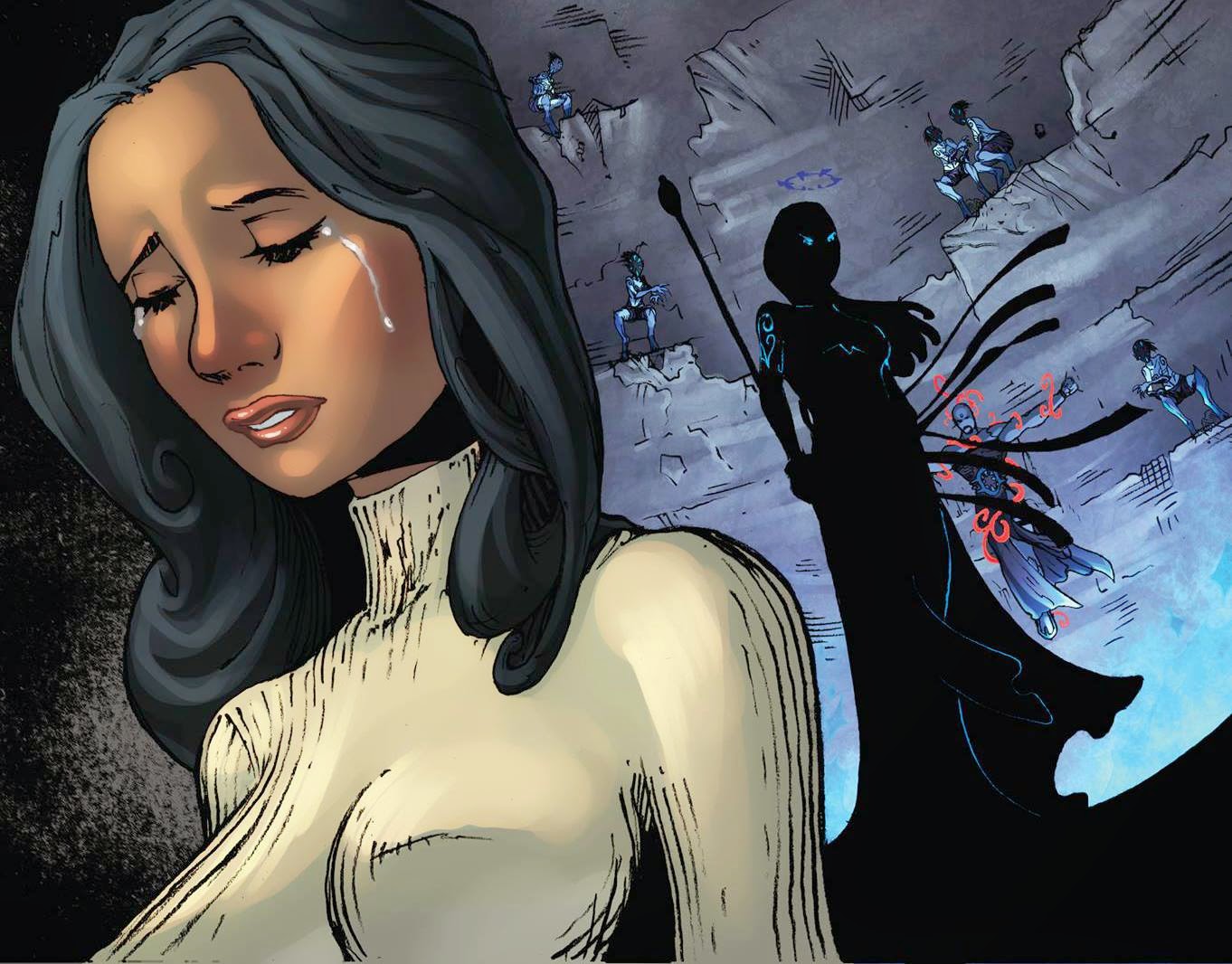 Stephane De Caneva is the artist on Gospel’s story in the second SENTINELS Anthology. Born in Marseille, France, Stephane started his career as a computer engineer before working as a freelance illustrator and comic-book artist.
I first saw Stephane’s work when he entered the 2nd Drumfish Productions Art Contest on deviantArt. All of the judges were blown away by Stephane’s entries (yes, he did more than one!) and he won first place for his rendition of Samanya from NEVERMINDS.
I’m really a big fan of deviantArt and I’ve been fortunate to work with so many amazing artists that I’ve met on there and many of them are artists who entered our contests. As soon as I saw Stephane first entry, I knew I wanted him to work with Drumfish Productions one day.
Stephane’s art is unlike any I’ve seen before! I know I’ve said that before about artists (and I’ll say it again, because I’m drawn to new and exciting styles) but all you have to do is look at Stephane’s work and see that it’s one of a kind! What I love most about Stephane’s work is his line work. It’s so fluid and detailed! I have no idea how he does it, but he even makes still objects look like they are alive. He creates the settings and surrounding areas in his stories as if they are characters too and it creates unique and exciting environment. His world is very imaginary and I couldn’t think of any other character I wanted him to draw more than Gospel.
Stephane teamed-up with the NEVERMINDS art team of Jamie Fay and Danielle Alexis St. Pierre to tell Gospel’s story. Together, they created a beautiful and touching story that captures Gospel’s character perfectly! Jamie and Danielle will get their own spotlight, but it was exciting to see them work in a different way together. And Stephane’s art went from soft and serene with his depiction of Gospel on Earth to moody and electric when she was the ruler of Hell.
Stephane has had many published works in France include L’AFFAIRE DE L’AUBERGE ROUGE and 7 CLONES. And currently, Stephane is working on the graphic novel METROPOLIS, published by Delcourt. Please check out more of Stephane’s work at http://abc142.free.fr and www.abc142.deviantart.com

MINI-REVIEW OF NEVERMINDS #4 ON IGN

NEVERMINDS #4 got a positive review (B+) from IGN! I think that's four out of four for NEVERMINDS by them now. We're very happy they continue to pick us to spotlight in their indie recap of Comixology Indie Submit titles. NEVERMINDS #4 is written by me (Rich Bernatovech), art by Jamie Fay, Colors by Danielle Alexis St. Pierre and layouts for some pages by SENTINELS artist, Luciano Vecchio!

NEVERMINDS #4 AVAILABLE ON COMIXOLOGY FOR .99 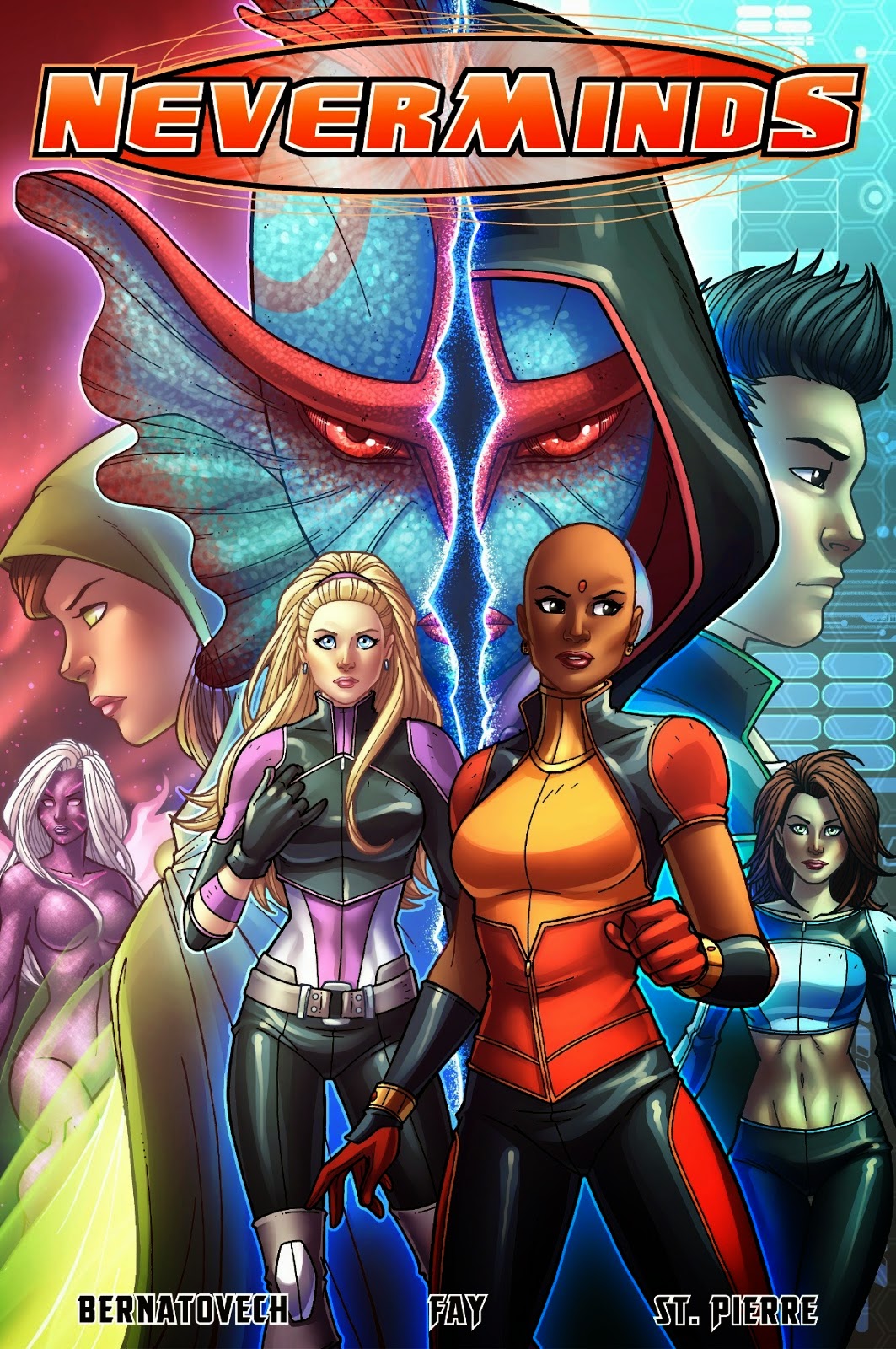 We're very proud to announce that the fourth issue of NEVERMINDS is now available for download on Comixology for only .99! This issue is filled with revelations! The entire status quo of the series changes and if you thought last issue's final page was a shocker, wait until you see this issues' ending!
Written by me (Rich Bernatovech), art by the amazing, Jamie Fay and colored by the talented, Danielle Alexis St. Pierre, we hope you will check out the issue on Comixology here.
We will also have printed copies in our hands by the end of the week and available via our Drumfish Productions store.
Big thanks to the incredible, Luciano Vecchio, who provided layouts for some of the pages in the issue. Thanks, Luc!

I first met Jeffrey S. Streeter at a comic convention and was immediately impressed by his preparation for getting sketches. I’d never seen someone so organized about getting commissions before. Jeff even has a reference book for artists to use that is complete with multiple alphabetized variant costumes of each character. As probably the biggest Titans fan I’ve ever met, Jeff’s collection of original art is beyond compare. Seriously, I don’t know how he does it, but he gets the most amazing sketches from artists and he gets them with ease. Maybe it’s because Jeff is such a naturally likable guy that even someone like me can’t help but become friends with him.  In fact, when I first met Jeff, I walked away thinking I’ve known him for years.
I quickly realized that’s all part of Jeff’s evil plan. How else can you believe that the die-hard Titans fan is also a prominent forensic investigator? Or that he and his partner have their own company focused on developing creator-owned content for print, stage and screen? And that the company is (not surprisingly) called Evil Mastermind, LLC! It all makes sense.
It also made me believe that Jeff is a creative guy and with his background and credentials, he’d be the perfect mastermind to write the Agent Huggins story in the second SENTINELS Anthology. As I mentioned before, Agent Huggins is an important character to me for personal reasons and I wanted to make sure she was handled by creators who would get her right. I was very happy when Jeff agreed to write the story and even happier once I read the script he turned in! In just 10 pages, Jeff was able not only captured Agent Huggins’ character, but he was able to recapped her entire history, give her depth by revealing her relationship with other characters (good and bad) and tell an exciting and interesting story that moves the character forward. Seriously, I couldn’t ask for a better story for Agent Huggins!
I’m extremely proud of the story Jeff and Sasha have created for such an important character in the SENTINELS universe! And I can’t thank them enough for being involved in the book.
Please follow Jeff on twitter at https://twitter.com/EMLLC00


And check out some of the amazing sketches Jeff has gotten in his collection over the years at http://www.comicartfans.com/gallerydetail.asp?gcat=40361
Posted by Rich B. at 10:24 AM No comments:

As we prepare to finish the second SENTINELS Anthology, I wanted to start sharing some of the amazing work that all of the creators have done for the book!
We have over thirty talented writers and artists from all over the world involved in this and we’re honored to be working with them. I plan to spotlight and talk about each of them and their contribution to the second SENTINELS Anthology over the course of the next months.
First up is SASHA GLADYSH!
Sasha Gladysh is from Izhevsk, Udmurtia (Russian Federation) where she used to be a designer and newspaper illustrator. Over the last few years though, Sasha has been doing mostly freelance work on independent comics and webcomics, doing illustrations for books and video games and also working in animation. Obviously, I’ve been a fan of her work on deviantArt for a long time now. What first caught my eye about Sasha’s work was the way she draws faces. They’re very expressive and emotional. She has the ability to capture a mood perfectly with her clean and precise lines. Add to that the way Sasha colors and I believe it’s a very powerful combo!
Teaming up the right artist with the right story is often difficult. But it’s also something I put a lot of thought into. So, when I received Jeff Streeter’s story for Agent Huggins, I knew Sasha was the perfect artist to bring his words to life. Agent Huggins is an important character to me (she was based on a real person who had passed) and Sasha did not disappoint in her strong, determined and vulnerable rendition of the character.
As one half of the first creative team to complete their story, Sasha and I hadn’t spoken for a while since her work was long done. But with the book almost complete, we’ve been in communication again and I excited to have been shown what Sasha is working on now! She told me I could share this, so I hope people will check it out, but Sasha is working on her own animated film! Seriously, she’s drawing a movie!! I wish I had that kind of dedication and ambition. It blows me away to think of all the work she is doing for it and it looks amazing! But please don’t take my word for it, check out her blog ( http://autumn-sacura.tumblr.com/tagged/nylash-no-vumurt ) to see character designs (which are so detailed and unique!) and short animated clips. I can’t wait to see the film complete!


Please check out more of Sasha’s work on her deviantArt page at http://autumn-sacura.deviantart.com/
Posted by Rich B. at 11:40 AM No comments:

Since the fourth issue of the re-visioned and colorized version of SENTINELS just became available on Comixology at http://cmxl.gy/1osxpjy, we thought we should show some of new work in the book. In addition to being able to see the first three pages on Comixology, here are a few panels of a new page for this issue which spotlights Phazer! We hope fans of Phazer will like the new page for him as it gives him a bit of missing background that we had wanted for him. And since his figurine just came out (see info here at our store), it seems like good timing.
Artwork by Luciano Vecchio!
Posted by Rich B. at 11:37 AM No comments:

SENTINELS #4 AVAILABLE ON COMIXOLOGY FOR .99 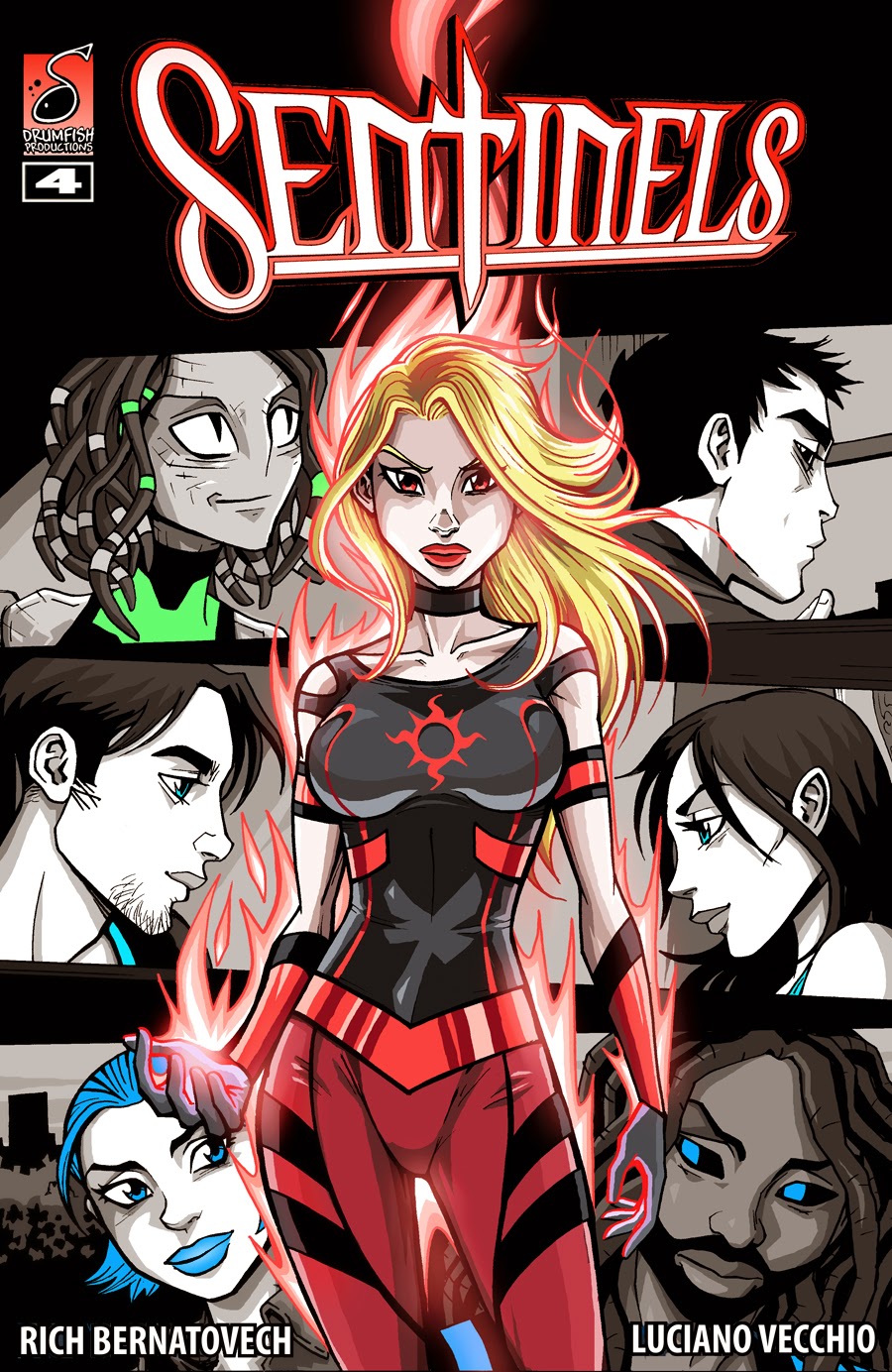 The fourth issue of the re-visioned and colorized version of SENTINELS is now available for download on Comixology for only .99! Fill with new art and text, we continue the colorization of the first SENTINELS trade. As the SENTINELS regroup from the events of the confrontation with Damien, the government organization known as the Order prepares to make their move! Written by me (Rich Bernatovech) and art by the ever talented, Luciano Vecchio, we hope you check it out! And if you enjoy the issue, rate us on Comixology's page! Thanks! Check out the issue here!
Posted by Rich B. at 5:00 AM No comments: