So, usually at comic conventions I have a couple of sketch books and I have artists draw some of the different Drumfish Productions characters in them. I really enjoy seeing all the different takes on characters and the amazing styles that each artist has. But having sketches in a book doesn't really enable me to display the art in there. So, even though I plan to continue getting sketches in my sketch books, I designed a bunch of large art boards with squares on them that I plan to have friends and different artists who's work I admire draw on them. Of course, I had to get Jamie Fay and Luciano Vecchio be the first to draw on these! Both of them drew three character each; one from SENTINELS, one from NEVERMINDS and one other character that I don't want to show until we are close to printing the 2nd SENTINELS Anthology. Luciano drew Templar from SENTINELS and Samanya from NEVERMINDS. I found this interesting because it's very clear that Templar is the leader of SENTINELS, but I never told Luciano that Samanya is the leader of the NEVERMINDS team when they are out on the field. But he ended up drawing both leaders (and maybe a third, lol, tease). And on the flip side, Jamie Fay drew Alanis from NEVERMINDS and Gospel from SENTINELS. I thought this was interesting too because Jamie drew both of the sensitive and intuitive characters from each book (and the third character he drew fits right in that theme too!). I'm proud to be working with such great artists and friends and I hope to keep posting pictures from this side-project until it's complete and I can show the entire thing. The scans do not do them justice. And just know that these are small in size, about 3" x 3". Here are the first four squares on the boards! Thanks again Luciano and Jamie! 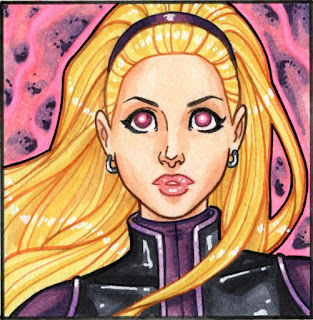 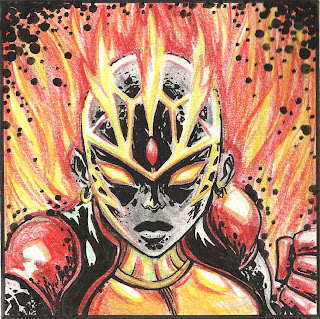 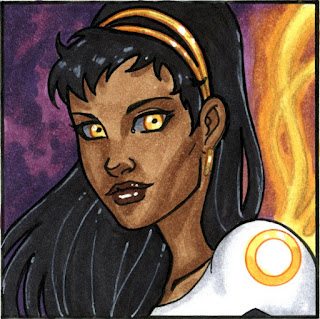 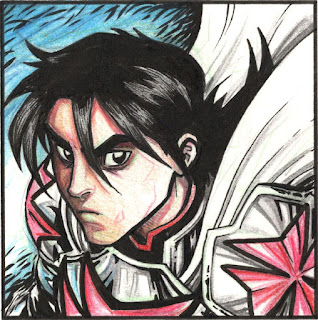 Here are four amazing renditions of the NEVERMINDS ladies from within the Abyss were drawn by Holly Mongi. They are Sanria, Aine, Yemenja and Carol Munroe and all are very important to the NEVERMINDS series. I really love Holly's work and think that each of the characters look beautiful drawn by her. Please check out more of Holly's work here! We're also excited to have Holly involved in the 2nd SENTINELS Anthology coming out later this year. 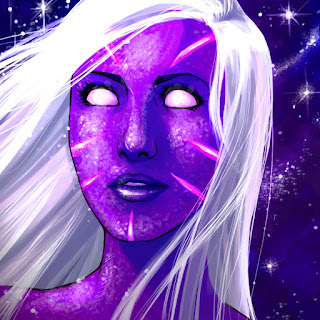 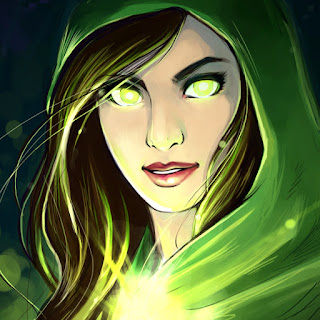 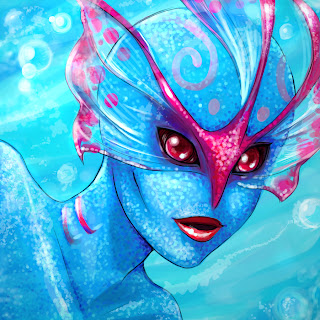 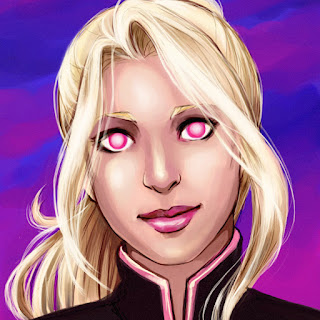 What the what?? Lol. This is not a new character in any Drumfish books, but it is my pup Harlee drawn as one of the Neverminds team by TamberElla. This is an early birthday gift from Neverminds artist, Jamie Fay. Thanks, Jamie! 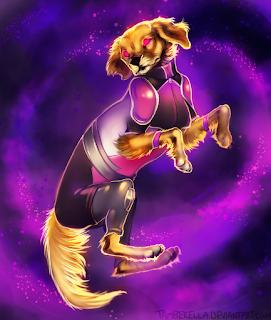 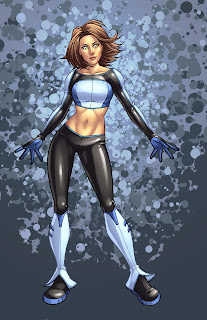 We're very proud to show the design for the next Drumfish Productions NEVERMINDS figurine, Nina! Drawn by Jamie Fay and colored by Danielle Alexis St. Pierre, we reveal Nina's new look that comes with a new attitude starting in NEVERMINDS #4. We'll post progress pictures of Nina along with the SENTINELS figurine of Splash as we get them.
Posted by Rich B. at 7:39 AM 1 comment: 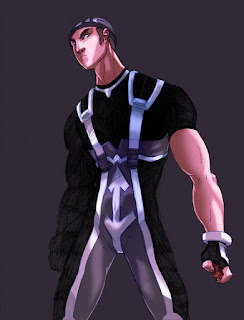 Here is a sketch study of Crusher by the very talented Bernce. This was done in preparation for the second SENTINELS Anthology which is well underway and full of amazing art, story and surprises!!
Posted by Rich B. at 7:31 AM No comments: 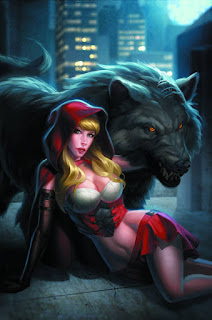 It seems like all I do lately is promote all the amazing creators I'm lucky to work with! I'm really happy to do that once again for NEVERMINDS colorist, Danielle Alexis St. Pierre! Danielle is the colorist on Zenescope's Grimm Universe #2! It's no surprise that Danille is in demand and headed toward the big time. Big congrats to Danielle!!! :)
Posted by Rich B. at 7:26 AM No comments: 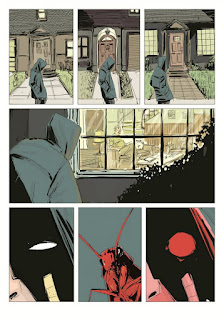 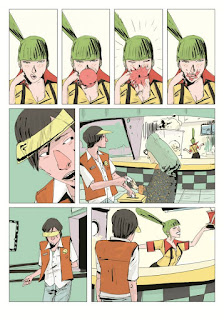 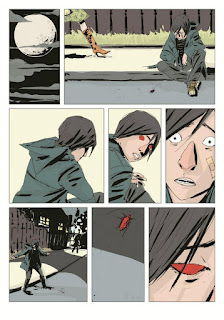 Here are a few new pages for the long awaited original graphic novel, BUGGED! Check them out and then go the Drumfish Store at http://www.freewebstore.org/drumfishproductions/index.aspx?pageid=1777230 and leave some feedback for SENTINELS and NEVERMINDS, so new readers can get an idea of what past readers think of our work. We'd really appreciate it and it'll only take you a few minutes. :)
Posted by Rich B. at 4:48 AM No comments:

Three of Luciano Vecchio's DC Super Heroes books for Young Readers came out over Christmas. And this week, two more came out! Check your local comic shop for them and help support the SENTINELS artist extraordinaire! Great for all ages! 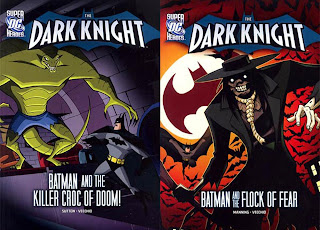 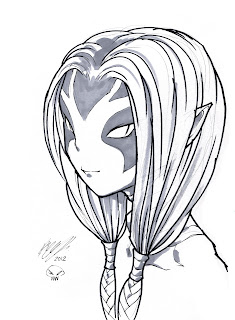 Another favorite Indie artist of mine is Ross Campbell. Ross is a really great artist and writer, which is rare to find in creators. His comics are unique and always have a voice that stay with you long after you've finished reading his work. I asked Ross to draw something for me in my sketchbook at the 2012 NYCC and he did this headshot sketch of Viperella from the 3rd Gen SENTINELS. I really love it! Thanks again, Ross! 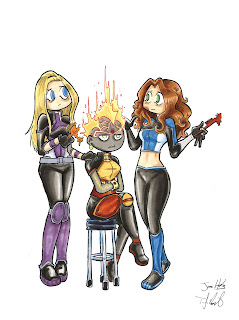 Two of my favorite artists and creators are TJ Dort and Joe Haley. They do the awesome Indie comic, the Underburbs, that I can't recommend enough! I always try to get something by these guys when I see them, so at the 2012 NYCC, I had them do the main characters from NEVERMINDS (Alanis, Samanya and Nina) and in true style by them, Joe and TJ did an amazing job with a lot of humor. Notice the melted brushes as Nina and Alanis try to comb Samanya's flame hair, lol. Perfect! 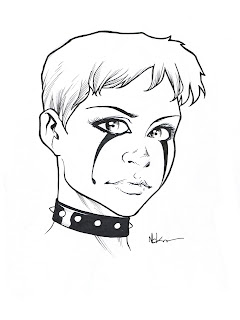 Harlette from SENTINELS drawn by the extremely talented Mike McKone at the 2012 NYCC. I love the facial expressions Mike gives each character he draws!
Posted by Rich B. at 3:18 PM No comments: 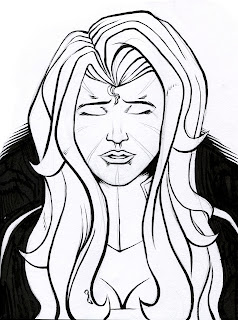 Here is a sketch of Sanria from NEVERMINDS drawn by Javier Cruz Winnik at the 2012 NYCC. Javier is the man! I love this! Please check out more of Javier's work here.
Posted by Rich B. at 3:16 PM No comments:

Projects:
BUGGED - Finally finished and being lettered now!
SPLASH FIGURINE - Designed and sending for sculpting soon!
NINA FIGURINE - Designed and sending for sculpting soon!
NEVERMINDS #4 - Working on now! (The last page reveal from issue #3 is going to be trumped by this issue’s secret!)
SENTINELS ANTHOLOGY #2 – Halfway completed! Wait until I... start showing previews! Amazing talent involved and the 3rd Generation SENTINELS return in an unexpected way.
There are a few other things, but more on them later!

Conventions (with Jamie Fay):
MEGACON (Florida) – March 15-17 (along with Danielle Alexis St. Pierre!)
BOSTON COMICON – April 20-21
WIZARD WORLD PHILLY – May 30,31, June 1-2
HEROES CON (North Carolina) – June 7-9
BALTIMORE – September 7-8
PITTSBURGH - September 27-29
NYCC - ?????
And just to remind people, if you’re thinking about getting a commission from one of us at the show, write us early and we can do it before the actual convention. There is always less rush that way. And if you’re getting something from me, I charge less when I do commissions at home.