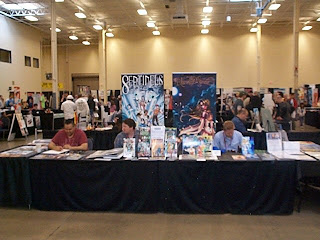 I think I've finally recovered from this past weekend's Pittsburgh Comicon, lol. I haven't been this tired from a convention in a long time. It feels like the entire weekend zoomed by. Seriously, it went by super fast. But I had a really great time and got to chat and hang with people I rarely get to see. I travel with Jamie Fay and Rey Arzeno (6+ hour in a car!!!) and we got in late Thursday afternoon. We quickly dropped off our stuff at the Con and then checked into our hotel room. Thursday night is always a good night for catching up with people and Al Dorantes from Luchador Enterprises always throws the best parties. Al also always does something special for the "Make-A-Wish" charity auction that's held on Saturday night. Last year it was people drawing on plates and this year it was nice ceramic tiles. I actually did one, but only one, lol, 'cause I'm still not 100% feeling my art. It's getting better though. So, Thursday was great and everyone was excited for the weekend. 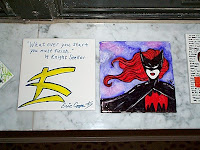 Friday the convention was open from 1-7. There wasn't too much traffic that first day, but I still managed to do okay. Mainly because (surprisingly, lol) my art was selling. I sold a few pieces of art and some sketch cards, as well as a few SENTINELS books. Jamie and Rey were both totally booked up the first day and both sold a bunch of prints. They also took part in the "Quick-Sketch" charity draw which has them do quick sketches that get raffled off for charity afterwards. We had a lot of buzz for our collab book with Luchador Enterprises and Space Monkey Comics, COMICON ON MONSTER ISLAND, but we should have done more promo for it. Next year we'll do that for sure as we have a lot of good ideas! After the convention people all went out to eat with the plan to meet up after at the hotel bar or the usual Friday night penthouse party. Sadly though, the hotel was recently renovated and they changed a lot. There is no longer the cool, upbeat and fun bar there and it's been replaced with an uptight, VERY SMALL, NYC lounge-like bar with not as friendly bartenders. On top of that, there was no party thrown by the convention organizers. That really stunk because one of the best parts about the Pittsburgh Comicon is the friendly atmosphere that allows you to socialize and make new friends since everyone goes to the same party afterwards. We still managed to make the most of it and had a great time.

Saturday was a whirl-wind. It went by really fast. I felt like I didn't sit all weekend and talked so much that I think I'm still trying to get my voice back. Many of the awesome people we've come to know stopped by and we got to chat with them a bit. Of course they all asked about NEVERMINDS and I had to promise that it'll be done by the end of the year! lol. It will be! Jamie and Rey were doing another busy day with them both drawing from start to close. They also took part in the "Quick-Draw" charity event. I sold more books Saturday then art which was great. I also sold a few of my own sketchbooks! Yeah! lol. 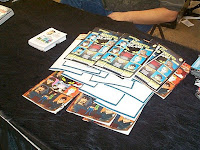 Sunday was costume day and it's always great to see all the people who dress up. Our #1 SENTINELS fan, Keefer, even showed up dressed as Hammer from Dr. Horrible's Sing-A-Long and gave us a musical performance that impressed as right on the con floor. Ya got guts, kid! It was great! Jamie, Rey and I were all so-so busy but not like Saturday. This allowed me to get a bunch of awesome sketches that I'll post soon. 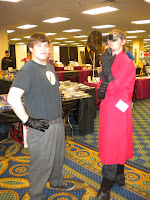 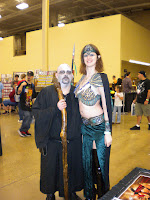 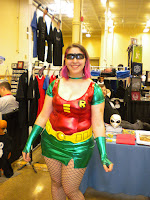 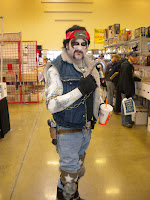 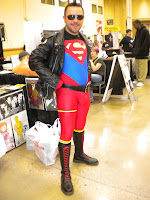 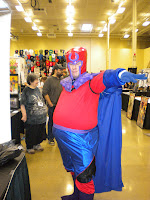 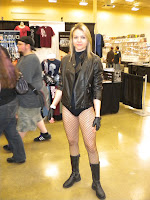 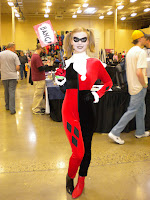 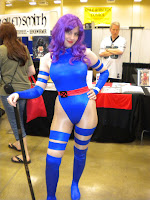 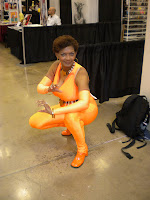 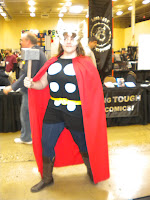 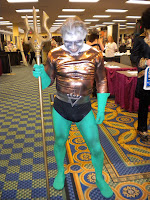 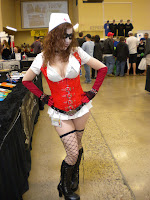 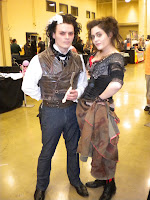 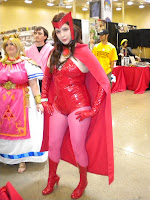 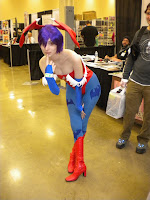 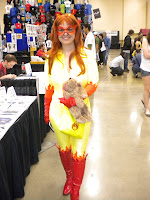 All in all, it was a great show and even though I didn't sell the volume of stuff I hoped to, I still came out better than a lot of folks. It's sad that the show didn't have the draw it usually has and that they changed so many things.
Posted by Rich B. at 8:30 AM 3 comments:

I'm off to the Pittsburgh Comicon along with Jamie Fay and Rey Arzeno! We'll be at tables S053/So63. If you're in the area stop by and visit us. I'll have copies of all 5 SENTINELS books, my new Sketch Book, the collab book 'Comicon On Monster Island', prints of my JLA picture and tons of sketches and sketch cards! Jamie and Rey will be doing their awesome comissions and Jamie will also have his new sketch book there. It's going to be awesome!!
Posted by Rich B. at 4:53 AM 2 comments: 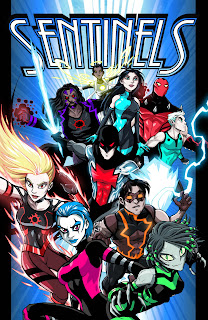 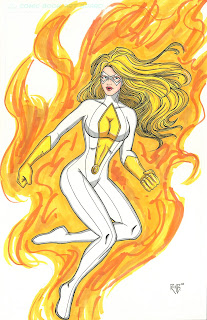 With the Pittsburgh Comic Con only a few days away, I'm trying to get everything finished in time to head out there. Here's a cool commission I did for an advanced order. Moonstone was a member of the Thunderbolts and later the Dark Avengers, She's pretty cool and I like the way this commission turned out. I did this with Prismacolor markers. :)
Posted by Rich B. at 8:21 AM 2 comments: 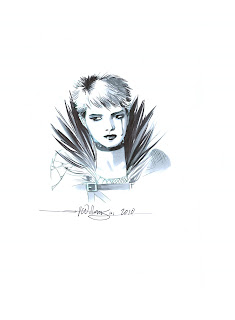 J.H. Williams is (in my opinion) one of the best artists in the comic biz right now. His incredible work on Batwoman has been ground-breaking and he's raking up the awards! I wasn't sure if I was going to get the book, but I caved because of J.H.'s work. I'm really glad I did because Batwoman is one of those titles that you just immediately get a different vibe from. It's unique and fresh. The art is stunning and visually different from anything I've seen before. I highly recommend it. Luckily for me, I had the rare chance to meet J.H. last year and he did this very realistic sketch of Harlette for me. I really love it.
Posted by Rich B. at 11:33 AM 2 comments:

With the Pittsburgh Comic Con next weekend, I'm trying to get a few more sketch cards done. Here's a bunch of different DC characters. 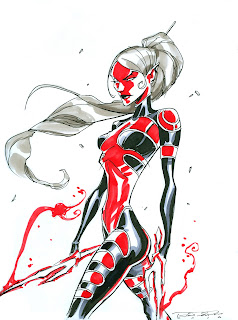 One of my favorite artists is definitely Khary Randolph. I've known Khary for a while now and he never lets me down with his awesome artwork. This sketch of Rapture from SENTINELS is one of my favorites I've gotten of her. I love the way he uses only red as a color accent here. It really makes her pop! And for anyone who doesn't know, Khary is one of the artists responsible for the character designs on the Wolverine and the X-Men cartoon. Rumor is right now that there won't be a second season of that. It would be a shame as I'm sure Khary's designs would be amazing.
Posted by Rich B. at 9:15 AM 2 comments: 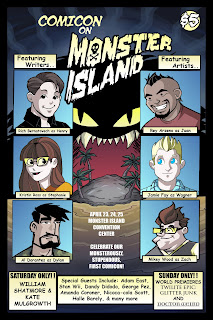 I'm proud to show the cover for the collab book I did for this year's Pittsburgh Comicon! COMICON ON MONSTER ISLAND was done by myself, Jamie Fay, Rey Arzeno, Al Dorantes, Kristin Ross and Mikey Wood. It's a super funny comic (old school floppie size!) about a group of creators who go to a comic convention on a tropical island. It has that old school Scooby Doo mystery type fun to it. We began this last year as a cross-promo idea for all of our companies at the convention and I'm really glad we did. It was a lot of fun. Special thanks to Luciano Vecchio for providing the awesome colors to the cover!
Posted by Rich B. at 10:20 AM No comments: 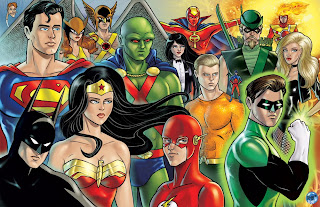 My good buddy and colorist of NEVERMINDS, Rey Arzeno, colored the JLA picture I drew last week. How awesome does this look? I love it! I'm loving it so much that I'm thinking for the first time ever, I'm going to make prints of this and sell them at the Pittsburgh Comicon. Thanks so much, Rey. You're super talented! For anyone who hasn't seen Rey's work before, check out his amazing Deviant Art page at http://www.arzeno.deviantart.com/ . He's got tons of art on there and previews of the series he's working on with Noel Short (writer of Splash's story from the SENTINELS Anthology) called Breakers. Check it out!!!!
Posted by Rich B. at 7:56 PM 4 comments:

Just a quick post with a few different sketch cards... 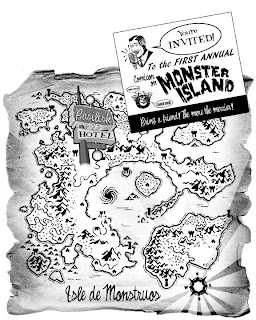 Let the buzz begin! Just in time for this year's Pittsburgh Comicon we'll be releasing a super funny humor book called COMICON ON MONSTER ISLAND. It's a joint effort between Drumfish Productions (myself, Jamie Fay and Rey Arzeno), Luchador Enterprises (Al Dorantes) and Space Monkey (Kristin Ross and Mikey Woods). We did this book specifically for the Pittsburgh Comicon and hope people will like it. We all met at the Pitts Con, so it's kind of nice to finally all be doing something together. We talked about doing this a few times, but this year it looks like we finally made it happen. If you're in the area or plan to attend the Pittsburgh Comicon from April 23 - 25, stop by and pick up the book! (I'm sure we'll have copies to sell to anyone who can't make it, just ask!). This cool map was done by Mikey Woods as promo for the convention. Gotta love it!
Posted by Rich B. at 7:15 PM 3 comments: 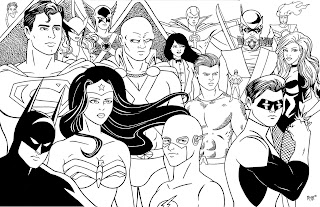 I did all the JLA cards I previously posted as sort of a warm-up to this JLA pic I did. It's the classic satellite area Justice League. I wanted to start doing some nicer pieces, so this is the first.
Posted by Rich B. at 3:11 PM 5 comments: