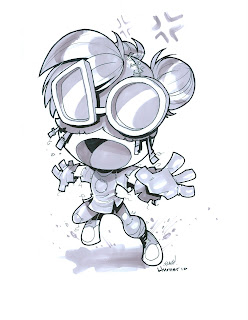 This sketch of Psyched from the 3rd Gen SENTINELS is the last of the sketches I got at the 2010 Pittsburgh Comicon. Psyched was drawn by Bryan Turner (Flash) of ID Comics. I really love Bryan's work and think he totally captured Psyched's personality and energy. Check out more of Bryan's work at http://sauceboy.deviantart.com/ .
Posted by Rich B. at 7:24 AM 2 comments: 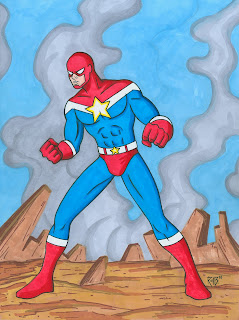 Here's another commission I did recently for Dom Sumner. It's his original character, Soldier. I had a lot of fun doing this for him (and the others I posted in the past) and really love working with these Prismacolor markers. The colors on this character turned out pretty cool with their patriotic tone.
Posted by Rich B. at 9:33 AM 2 comments:

SOME NEW ART AND SOME OLD REVISED

I've been selling more and more art at conventions since I started drawing again and did the "sketch a day" project last year. In fact, I've sold over 2/3 of those sketches I did at conventions. Crazy, huh? But one of the weird things was that not many of the half page headshots I did sold. I was surprised because I think most of them are better than some of the full page ones. So, I decided to color some of those old headshots, along the lines of the sketchcards I've been doing. I think they look a lot better now and plan to sell them for $10 at conventions. I even did a few new ones and plan to do more as this size works well for me. Here are three new ones I did (Emma Frost, X-23 and Superboy) along with a sample of some of the old ones I colored using Prismacolor marker (gotta love them, lol). 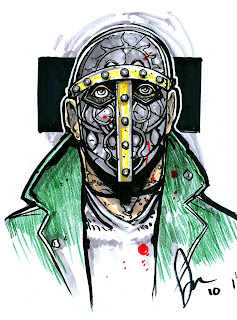 This sketch of Lightbringer in his look from SENTINELS Book 2: Masks, was drawn by Jeff McComsey. Jeff had a table across from ours at the 2010 Pittsburgh Comicon and he commissioned me to draw a Sgt Rock sketch card for him. When I delivered his card to him, I had the chance to check out his work and was really impressed. We ended up just trading art, lol. Jeff is the writer and artist on American Terror published by Alterna Comics. Soon, he plans to relaunch American Terror as a webcomic! Check out more of Jeff's work at www.mccomseycomix.wordpress.com .
Posted by Rich B. at 10:29 AM 2 comments: 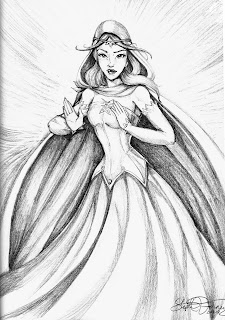 Here's a character I was surprised to see someone draw, it's Prophet in her original look (before she became all creepy and sick looking). I really love that Stephanie Forney picked her to draw and I think her style captures her perfectly. Stephanie has been at the Pittsburgh Comicon a bunch of times, but this was the first time I was able to get a sketch from her. She's a busy lady!
Posted by Rich B. at 10:21 AM 2 comments: 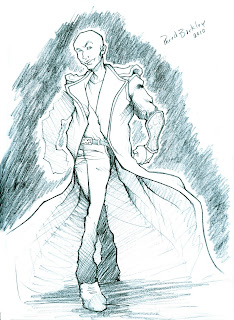 This sketch of Sin (in his costume from SENTINELS Book 2: Masks) was drawn by Phred Barkley. Phred is new to comics and this was his first comic convention. But he's already working on what looks like a cool project along with Stephen Foland. I really like Phred's hip style and the attitude he gave Sin here. Check out the beginning of Phred and Stephen's comic at www.dogsandsorcererscomic.com
Posted by Rich B. at 10:12 AM 2 comments: 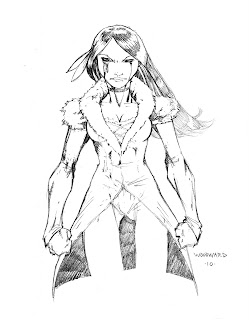 I'm want to try to post the rest of the sketches I got while at the 2010 Pittsburgh Comicon, so today I'm posting a few of them. This first one is Lady Nimue drawn by Scott Woodward. I like the soft style he used here and how it contrasts with the way she appeared in the SENTINELS books. I also like the detail he put into her costume. Check out more of Scott's work at www.scottwoodwardcomics.com .
Posted by Rich B. at 10:02 AM 2 comments:

IGNITE AND TIMEOUT BY MIKEY WOOD 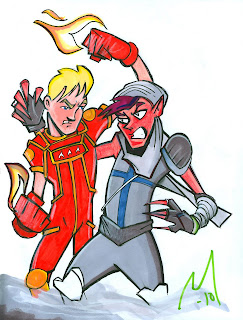 This sketch of Ignite and Timeout from the 3rd Gen SENTINELS was drawn by the talented Mikey Wood. I can't speak highly enough of Mikey and his art. His style is very energetic and fun which is totally the way Mikey is in real life. I also love how he has these two characters fighting, lol. That's totally them. Mikey also contributed to the jam comic we did this year, specifically for the Pittsburgh Con, called "Comicon on Monster Island". I had a blast working with him on it and hope we get to work together again soon. I'd plug Mikey's website, but he still doesn't have a real one up. Get to it, Mikey!
Posted by Rich B. at 2:44 PM 2 comments:

LIGHTBRINGER AND JESSE BY REY ARZENO 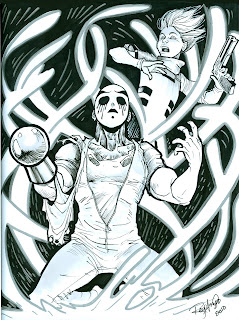 Here's a sketch by another of my favorite artists, Rey Arzeno. Rey is working along with Jamie Fay and I on NEVERMINDS and is super talented. He sometimes does sketches for me in my sketchbook before the conventions start and this one blew me away. It's a scence from SENTINELS Book 4 that captures Lightbringer and Jesse perfectly. Thanks again, Rey!!!!!
Posted by Rich B. at 7:47 AM 2 comments: 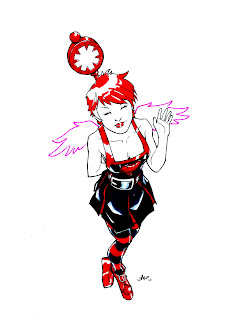 This very cute sketch of Heartache from the 3rd Gen SENTINELS was drawn by Jose Johann Jaro at the 2010 Pittsburgh Comicon. Jose is part of four artists that make up ID Comics. All four artists are CRAZY talented and super nice. I can't say enough good things about them. But don't take my word for it, check out Jose's art at http://lazeedog.deviantart.com/ and see all the ID Comics artists at http://idcomics.deviantart.com/ .
Posted by Rich B. at 2:00 PM 2 comments: 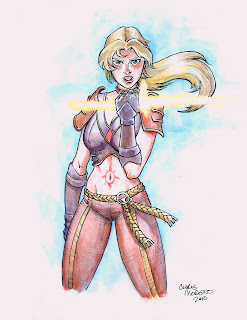 I still have a bunch of sketches to post that I got at the 2010 Pittsburgh Comicon, so I figure I need to start getting them up! Here's an awesome sketch by one of my favorite artists, Chris Morneo. Chris has done three sketches for me in the past and I always try to get something by him at each convention I run into him at. He NEVER disappoints. I love his style and coloring technique. If you haven't seen his work, you're missing out. Check out his Deviant Art page at www.chrismoreno.deviantart.com.
Posted by Rich B. at 10:32 AM 5 comments:

Last weekend was the 2010 Wizard World Philly Comic Con. I'm really behind in writing about it here on the blog, but I'm actually still a little exhausted from it, lol. It was super busy! Really, I was shocked by the turn out and the business we did. I have to be honest and say that I wasn't having the best expectations about this convention. For some reason, this year, communication between Wizard and the artists in artists alley was really bad. So bad that I went to the Con thinking that this would be the last time I do it. Others told me the same thing. That would be a shame because I really love Philadelphia. It's my "hometown" as I grew up near there and went to Temple's Tyler School of Art there. But once the convention started, it was amazing. There were so many people there and they were buying a lot. Saturday was so busy that they made an announcement and actually extended the convention hours. I've never been to a convention where they've done that. It was great for business, but totally draining as everyone had very little sleep. But it just goes to show how awesome the people of Philadelphia are. It's not called the city of brother love for nothing, lol. They treated us comic guys good. :)
I had a table in a pretty great location next to Jamie Fay and right behind was Rey Arzeno and Lauren Perry. The four of us travel to Philly together so it was luck that we were so close. Jamie and Rey filled up their commission lists first thing on Friday and I don't think either of them left their seats once, lol. We also got the chance to see a lot of friends and fans, old and new, and it reminded me why I like this convention so much. The whole weekend was a blur of talking, selling and promoting. It was great. I sold out of a lot the SENTINELS books and all the Sketchbooks I brought and sold lots of sketches. Big thanks to everyone who stopped by to say hi and supported us. I'll be posting more art and stuff from the Con soon!
And don't forget that Drumfish has a page on facebook now. Check it out and follow us at http://www.facebook.com/pages/Drumfish-Productions/117660288272651 .
Posted by Rich B. at 9:10 AM No comments: 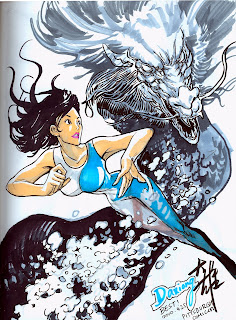 This sketch of Splash (from SENTINELS Book 1) was drawn by Daxiong. Daxiong is an amazing artist who I'm gotten a sketch from before and had the pleasure of seeing again at the Pittsburgh Comicon. Of course, I had to get something from him again, since I think his art is really great. This time he went all out and did a scene from SENTINELS Book 1 in color. How cool is that? I love it! Check out more of Daxiong at www.daxiong.deviantart.com .
Posted by Rich B. at 5:37 PM 2 comments:

This coming weekend we'll be at the Wizard World Philly Convention! I know this is a little late notice, but they didn't assign our tables until this weekend. Doh! Sorry about that! I'll be in Artists Alley along with Jamie Fay at table #905 and right behind us will be our buddy Rey Arzeno who's sharing a table with the very cool Lauren Perry at #1004. If you're in the area and attend the Con, stop by and say hello! And check out more of the guests that are scheduled to appear at www.wizardworld.com/home-pa.html .
Posted by Rich B. at 8:51 AM No comments: 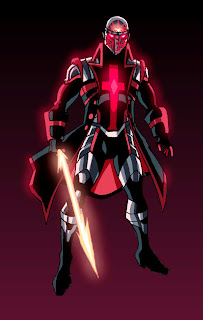 Here's another SENTINELS re-visioned color idea. This time it's Lightbringer. I think he looks very different and much more threatening. The red would also play off of the new color ideas for Templar which are cool.
Posted by Rich B. at 8:45 AM 5 comments: 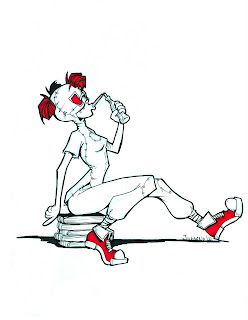 One of the first people I met when I first attended the Pittsburgh Comicon way back in 2004 was Phil Juliano. Phil is a great guy and has collaborated a lot with fellow Indie creator, Al Dorantes. Together the two have done a number of projects including Six Pack, Dog Days and Retribution. Then Phil moved south and wasn't at the Pittsburgh Con for a few years. He concentrated on
his comic strip, Best In Show, which focused a smart-mouthed dog and his owner. (It's a great strip and it was recently picked up by one of the larger papers in Phil's
area.) Luckily, this year, Phil emerged from the woods where he was hiding and came back to Pittsburgh! It was great seeing him again and I hope he returns next year too. But I could let him get away without drawing something in my sketchbook. Way back when we first met, Phil drew all of the second generation SENTINELS (see below) so I asked him to pick one of the 3rd Gen to draw this time. I love his sketch of Psyched!! Awesome, right? Check out Phil's funny comic strip at http://www.ineedcoffee.com/by/phil_juliano/ . 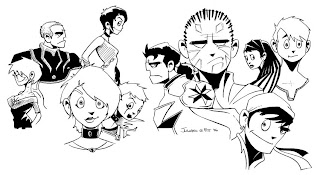