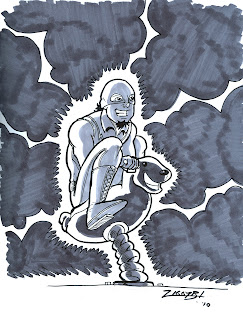 I'm back from the Baltimore Comicon and I had a GREAT time there. It was a short convention though and I really wish it was longer. I got to see and hang with a lot of people I haven't seen in a while and the crowd was super friendly and nice. Thanks to everyone who stopped by and purchased SENTINELS and checked out the NEVERMINDS previews. It was a blast seeing everyone. I didn't get a lot of sketches this time, because I was really busy at the table, but what I did get was an awesome haul. The first sketch I'm posting is by my buddy, Ziggy Blumenthal. Ziggy is responsible for the Indie comics; Operation Pajama Pants, Sidekicked and Chris Wnuk:Secret Jew. I really love Ziggy's art and sense of humor and wanted to get a sketch from him for a long time. I made sure to have him draw something this time and couldn't be happier with the results. I don't know how he thought of doing what he did, but it's funny, lol, and I don't have anything like this in my sketchbooks. I like when artists do something different. And this sketch is only a little taste of Ziggy's work. But don't take my word for it, check out Ziggy work at www.fakemccoy.com and see for yourself. Be aware that some of it is adult humor though, especially Cornerkicked. You've been warned, lol! Thanks again for the hilarious sketch, Ziggy!
Posted by Rich B. at 4:58 PM 5 comments:

This weekend we'll be at the Baltimore Comicon! I'll be there along with Jamie Fay and Rey Arzeno, the awesome art team on our soon to be released NEVERMINDS. We'll have some preview art there to look at, Jamie and Rey will be doing commissions and I'll have copies of all 5 SENTINELS books, my sketchbook and a bunch of the original headshot sketches I've done this year. Jamie Fay and I will be in Artists Alley at table A126 and Rey Arzeno will at table A88. Stop by and say hello!
Posted by Rich B. at 10:14 PM 5 comments:

The 2010 Baltimore Comicon is this weekend and I've been trying to get a few more sketches done for the show. Here are a few new ones as well as a few old sketches that I still had from my "sketch a day" project and decided to color. 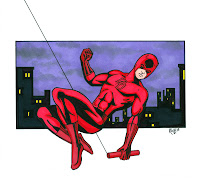 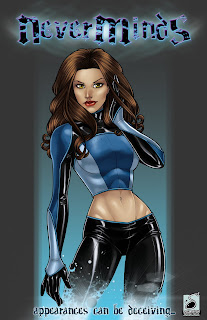 We weren't going to show this new promo image this soon, but the art was just posted on the NYC Comicon's artist alley list, so we figured it was best to post it now. Pictured above is another of our lead characters in NEVERMINDS (drawn by Jamie Fay and colored by Rey Arzeno). Wait until you see her in action! I can't wait to show some pages soon. Jamie and Rey are kicking butt! We just want to wait a little longer until we're closer to the release date in October. Stay tuned for more promo art!
"Appearances can be deceiving..."
Posted by Rich B. at 1:28 PM No comments: 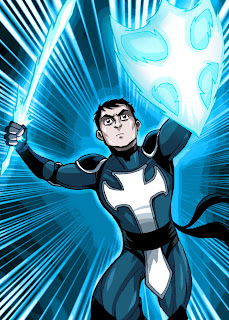 A few years back, my friend David Ryan, began the ambitious task of doing a crossover featuring comic's independent creations. It's called "War of the Independents" and when you think about it, there are thousands of independent creations out there and to say the project is ambitious is an understatement. It's almost crazy! But David is pulling it off and doing amazing work. The first issue of the book is scheduled to be released at this years NYC Comicon in October and Luciano Vecchio and I are very proud that David has included our character Templar from SENTINELS in it. I'm excited to read the story and see so many great characters interact. And in addition to releasing the crossover, they are also doing a trading card set featuring many of the characters from the series and Templar is featured on one of those cards. I was given permission from David to show the art that Luciano did for the card. It's great to see Luciano draw Templar again and obviously from the costume he's wearing, this would fit in between SENTINELS book 1 and 2. Cool, huh?
Posted by Rich B. at 7:21 AM 4 comments: 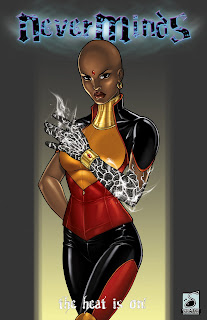 Another promo image! We wanted to pace these out a bit before we posted too much. Jamie Fay, Rey Arzeno and I have been working hard on our comic NEVERMINDS and this second image shows a character that has a big part in the book. As we posted before, we started all over at the beginning and completely reworked the entire book. We did this for a number of reasons, but the important thing is that we are all REALLY excited about it now. We plan to release the first issue at the NYC Comicon in October. Stay tuned for more promo pieces.
The heat is on!
Posted by Rich B. at 6:04 PM 5 comments:

We're gearing up for the Baltimore Comicon in two weeks and we'll have lots to show, especially new Neverminds work, but I've also been doing marker-colored headshots to sell at the Con. Here are a few new ones: 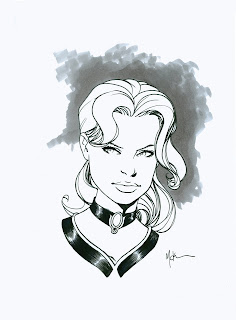 Here is the last of the sketches I got at the 2010 Wizard World Philly Convention, this time it's Firebomb from SENTINELS drawn by Mike Mckone. I've gotten a few sketches by Mike in the past and he never disappoints. His line work and facial expressions are incredible and he puts a lot of detail into everything he does. It doesn't hurt that Mike's also a super nice guy who always makes time to chat with fans. Currently, Mike is drawing Marvel's Avenger's Academy which is getting great reviews.
Posted by Rich B. at 5:29 AM No comments:

Here are two fan art pictures I've been meaning to post for a while. The first is by Dan Sehn who is the creator of Argo Comics. Dan has been a great friend at comic conventions for a long time now. Recently, he invited Luciano Vecchio and I to take part in his new Argo 5 Anthology which is scheduled to be released later this year (more on that later!). In it, we get to contribute four pages of all new SENTINELS work, where you'll see the team meet Dan's Argo 5 team. It's a great story and I really look forward to seeing it printed. Luciano and I had a blast taking part in the cross-over. As a gift to me, Dan did this colored sketch of Splash! Thanks, Dan.
The next sketch was done by SENTINELS fan David T. Allen a while back and I apologize for just posting it now. David is a BIG supporter of Drumfish and I love the energy he put into this pic of Wickkid from the 3rd Gen SENTINELS. Thanks, David!
Posted by Rich B. at 9:50 AM No comments:

We're working very hard on NEVERMINDS right now, but here are a few headshots I was able to sneak out recently. I'll be selling these at conventions, the next of which is the Baltimore Comicon this month!