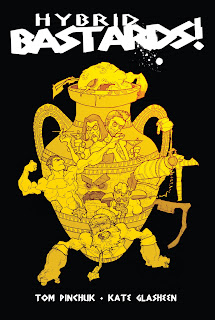 It's been a long time since I read something that was new and exciting and that I was really wowed by, but Hybrid Bastards (written by Tom Pinchuk and drawn by Kate Glasheen) totally filled that void. I heard about Hybrid Bastards a long time ago from Miguel Rodrigues (who I haven't seen or heard from in forever and hope is well!) and I really wanted to pick up the book. But just as the trade for the series was solicited, Archaia had some problems and cancelled all their solicitations and postponed the trade's release. Flash-forward a year or so, and to my surprise, sitting at the table across from me at the 2010 Baltimore Comicon, was the artist of Hybrid Bastards, Kate Glasheen! As soon as I saw that she had copies of Hybird Bastards there, I made sure to get a copy. They were only $20 for a hardcover collection! Kate's art alone on the book is enough to sell me, but the story of Hybrid Bastards is just as awesome. Basically (and not to spoil too much) the premise of the book is about the Greek Gods, specifically Zeus and how one night Hera put a spell on him that made him not be attracted to pretty women, but anything else instead, lol. This results in a bunch of hybrid bastard creatures being born (ex. half god/half car, half god/half brick wall). The characters in Hybrid Bastards are very unique and funny. I loved all of them and truly hope there is a sequel planned for them. I highly recommend checking this book out to anyone who is looking for something fresh! Learn more about Hybrid Bastards at www.archaia.com/blog/titles/hybrid-bastards .
Posted by Rich B. at 8:24 AM

I really like her style. HB looks like it was entirely colored with watercolors! I definitely need to check it out!

Yeah, you should check it out. I think Kate will be at the NYC Comicon selling copies. I can't remember if you said you were planning to go or not.

We'll both at NYC actually. Glad you guys like the book! Stop by the Archaia booth and say hello!

Hey Tom! I'm glad you saw this on here. Hybrid Bastards is great! I'll definitely stop by and say hi in NYC. Hope others do the same for you. :)