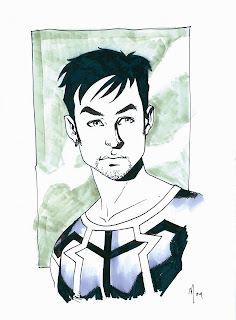 Here's the first of the bunch of sketches I got at the 2009 Pittsburgh Comic Con. This sketch of Electron was done by the incredible Mike McKone. Mike has draw a ton of books for both DC and Marvel. Most noticeably, Exiles, Spiderman and Teen Titans. It was his work on Teen Titans that got my attention (even though I remember him on some Justice League books in the 90s). I think his style is unique as his characters truly look three dimensional. I feel very lucky to have gotten this sketch by Mike and also a little bit shocked. At the Con, Mike was totally open with no waiting list. I couldn't believe it. I always wanted to get a sketch from him, but he was always booked up at other shows. Who'd have thought it. About an hour after I gave him my book, Mike was finished with this awesome portrait of Electron. Easily one of my favs.
Posted by Rich B. at 9:48 AM

Totally agree. He's a talented guy.
We missed you at Pittsburgh (just like in NYC). When you coming to the east coast again for a con? And what's the big news from your blog? Record deal? Tour with Mandy Moore?

this turned out really good. so did my blink. i'm glad i talked you into getting this.

Yeah, it was great to get something by him finally. You're Blink sketch was pretty good too.