FREEZING IN NYC AND CONVENTIONS 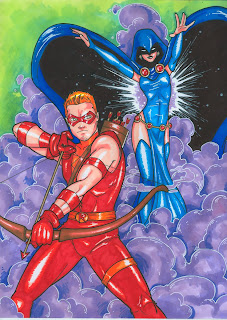 The weather in NYC has been so freaking crappy lately. The cold seems to have an affect on me and I have been neglecting the blog. But things are moving on all projects and we're gearing up for the cons in February. First I'll be doing the NYC Comic Con with Jamie Fay and Rey Arzeno. Both Jamie and Rey will be at the DRUMFISH table doing sketches. Noel Short (writer of Splash's story from the SENTINELS Anthology) and Andrew Charipar (artist of Serpenta's story in the Anthology) will be around at the con too.
At the end of the month I'll be heading down to Florida to attend the Megacon along with Jamie Fay. We did okay there last year and it was great to see a lot of people we normally don't get a chance to see. So, we're giving it another try. I enjoyed the con and we have a different spot this year so hopefully things will go well. Todd Latoski (writer of Electron's story for the Anthology) and Andrew Charipar both say that they will be there as well.
NEVERMINDS is looking really great! Both Jamie and Rey are working hard and the results are amazing. Luciano has done some work on CASPIAN CURSES that I want to show soon with his permission. So, they're will be lots to show soon!
The pic along with this post was a gift to me by Jamie Fay for X-Mas. It's my two favorite Titans. Jamie tried using a new technique with his markers on this. I think it turned out great!
Posted by Rich B. at 10:52 AM

con season is so fun!! i can't wait to reconnect with people!!