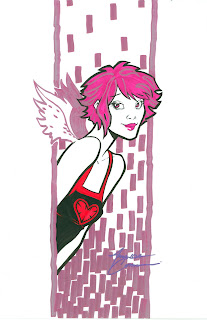 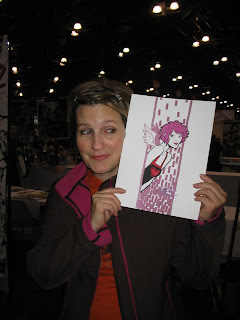 Lastly, I had the chance to chat with a lot of comic creators this weekend, among them was (once again), Amanda Conners. Amanda is such a great artist and the fact that she is an extremely friendly and honest creator makes her that much more a superstar in my eyes. Amanda did the drawing of Julia from the 3rd Gen SENTINELS that's with this post. I love it! It compliments the one she did of BoBo at Megacon last month. Thanks again, Amanda!!!
Posted by Rich B. at 1:56 PM

amanda is fastly becoming one of my favorite comicbook artists. she is super nice and a very down to earth person!!! our sketches turned out awesome!!!