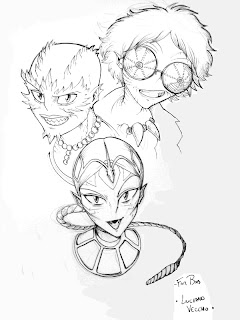 The SENTINELS Anthology hits stores today. I checked out Midtown Comics this morning and they had a good amount of book. I have a friend going later tonight and we'll see how many copies are left. I also heard from Jamie Fay that a friend of his went to his local comic store this afternoon and they had already sold out. Very cool!
Attached with this post is a commission Luciano did for Bob Eddy last year when he visited and attended the Pittsburgh Comic Con. I cleaned the pic up a bit and wanted to repost it. It's definitely one of my favs and I thought it was fitting to post it today.
Off to Wizard World Philly tomorrow. Stop by and say hello!
Posted by Rich B. at 11:24 AM

Best pic ever! Of course I own it so I guess I am biased!!

lol, yes, you are. But it's still an awesome picture!