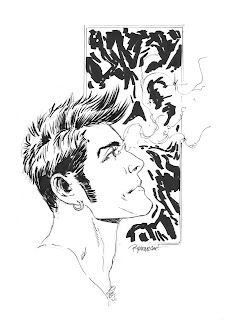 It's often hard to stay positive in the comic biz, especially as an Independent publisher. You get knocked around a lot, back-stabbed a lot and snubbed sometimes for no reason other than your not friends with the right people. Believe me, I've been there and still am, lol. But whenever I get to the point of just throwing in the towel and admitting defeat, I try to look at the good things that I've accomplished and the great people I've met. One of those people high up on the list is Phil Jimenez. Phil is a huge name with the comic industry and rightfully so, he's one of the rare talents who truly lives up to his image. Not only is Phil an incredible artist, but he's one of the nicest guys you'll ever meet. He works very hard at his craft and it shows. I had met Phil a few years ago, but hadn't seen him in a long time. This year though, Phil was at the 2011 Pittsburgh Comicon and only a few tables away from me. All weekend long, Phil was drawing free sketches for people. His one rule - you had to wait there as he drew it. This meant, lol, you had to talk to him. Well, I mean you didn't have to, but why wouldn't you? It's rare to get time to talk one on one with a big name creator. I didn't bother to get in line for a sketch on Friday or Saturday, figuring that I didn't have time to wait in line, even though I wanted to and wanted to say hi. But when Sunday came around, I learned how quick Phil was drawing and had an opportunity to wait in line for a short time and get a sketch. Phil remembered me and we chatted for a while as he drew the sketch posted here of Electron from SENTINELS. But what was really cool was Phil stopping by my table later and chatting more and saying how great SENTINELS and NEVERMINDS looked and how impressed he was with the work. As we spoke, Phil mentioned how he also taught art classes back in NYC and he was teaching a superhero class in June. When I returned to NYC, I signed up for the class and ended having a great time and learning a lot of great tips. It's creators like Phil who I try to think of whenever I need to get back into that positive state of mind. He's a class act and incredible artist!
Posted by Rich B. at 5:59 AM

What an awesome post. that's cool that you took his class. I love Phil! and your right there are some catty ass BeYatches in this biz, glad to hear he's still one of the good guys.

Yeah, Phil is great. His class was very fun. I only wish he offered classes more often. We have to catch up soon, KaNoely!!