This week the SENTINELS Anthology was listed in Diamond's Preview catalogue. You can find us on page 285. Remind your local comic store to order! The item number is APR083812. Above is another sneak peak at art from the Anthology.
We'll also have the Anthology at the NYC Comic Con and the Pittsburgh Comic Con this April.
Posted by Rich B. at 8:02 AM 2 comments: 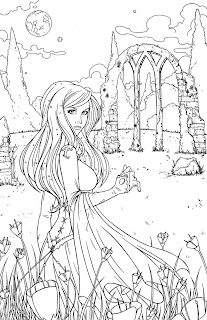 Like I said a few days ago, we're trucking along with NEVERMINDS and plan on having previews for the NYC Comic Con and the Pittsburgh Comic Con (both in April).
I'm really happy with the direction Jamie and I have started to go with this. It's much different then SENTINELS and is truly starting to space up into something unique. I use that word a lot, but I think it's important for Indie books to be unique. They're too much competition out there and you have to set yourself apart. And I think Jamie's art does just that!
This page (above) is of our main character Alanis.
I'll keep posting more of Jamie's art as we progress. Let us know what you think!
Posted by Rich B. at 11:16 AM 2 comments: 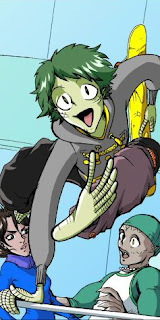 Tomorrow Diamond's Previews catalogue comes out and it will have the SENTINELS Anthology listed in it. . This is the issue that lists books shipping in June. We have a really nice half page color ad in the catalogue with the solicitation. And unlike the previous SENTINELS books, the Anthology is appropriate for younger readers and is full color.

Check it out and spread the word to your local comic shops and friends.

The item number for the Anthology is APR083812.

I've been talking about it for what seems like forever, so I figure it's time to start showing some sneak previews of NEVERMINDS. Here you can see our main character, Alanis (middle back) along with supporting characters Paige and Gavin (who are in front). Anyone who knows Jamie Fay's art knows this is going to be a great looking book. Keep checking for more previews!
Posted by Rich B. at 6:20 AM 1 comment:

READ IT! THE UNIQUES 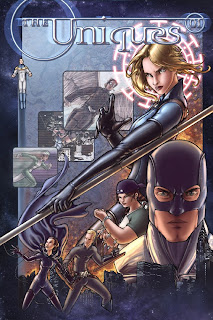 I had the chance to read THE UNIQUES this month while at the Florida Megacon. Written and drawn by the married creative team of Comfort Love and Adam Withers, THE UNIQUES is a superhero book that plans to tell the story of different heroes over generations. Premiering their first issue at Megacon, Adam and Comfort both do the writing and art on the book and plan to trade off art chores as they go.
The first issue sets up the series as the world has just avoided the start of the Third World War in 1994 through the preventive actions of heroes Mentor, Kinetic and the League of Seven. But just as peace is being announced , an attack occurs and kills most of the heroes.
Flash forward two years and we see Mentor and Kinetic's daughter, Telepath, wake from a coma caused by the psychic backlash of the disaster. From there we get to see how the world THE UNIQUES live in has changed. We're introduced to different survivors and the new generation of heroes that have taken the fallen heroes place.
It's a great set-up and Adam and Comfort have the entire series mapped out and plan on doing 100 issues! Yes, 100 issues. They're crazy and committed like that and I for one really look forward to seeing this story unfold.
When it comes to independent comics and self-publishers, part of the reason I'm so attracted to certain books is that I can really feel the passion the creators put into their work. You just don't get that from most of the big name comics out there and that's why I find them boring. The creators are just going through the motions. But THE UNIQUES is totally full of heart and creativity that sets it up there with other self-published books being done right now like MR. SCOOTLES, QUANTUM and TALES FROM THE CORNERSTONE.
This is actually the first superhero self-published books other than SENTINELS that I've felt connected to and I encourage everyone to give it a try. You won't be disappointed and like me, after you've read the first issue, you'll be dying to see what happens next. THE UNIQUES is definitely...unique!
Check out the book at http://www.uniquescomic.com/. There are tons of fun stuff on the website and you can even download the first issue for only 99 cents. How cool is that?
Adam and Comfort will also be at the 2008 Pittsburgh Comic Con next month. Stop by their table and say hello.
Posted by Rich B. at 5:15 AM 3 comments:

Just a little news for today. In another week, the SENTINELS Anthology will be solicited in Diamond's April Preview for books shipping in June. The order code for the Anthology is APR083812. Please let your local comic stores know you want to order it!
The Anthology also had a nice story on NEWSARAMA this past week. You can still check it out at http://forum.newsarama.com/showthread.php?t=149790 .
And last but not least, it's award time and both the EAGLE AWARDS and the HARVEY AWARDS are still accepting nominations. Deadlines are March 21st. So go to either or both of these sites and lend SENTINELS some support. Quick! Vote for SENTINELS BOOK 4: HOPE in the Original Graphic Novel category. You'll have to write it in as neither of the awards have us listed as choices, but you can still vote for us!
http://www.eagleawards.co.uk/nominate.asp
http://harveyawards.org/
Posted by Rich B. at 12:28 PM 2 comments: 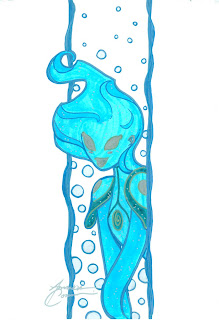 I got lucky this year at the 2008 Megacon and was finally able to get a sketch from Amanda Conner. I've always loved Amanda's work and tried a few times to get something. But she's in high demand and always has a long list of commissions by the time I got there. This year though, I got a chance to chat with her and ask her to draw one of the 3rd Gen SENTINELS. I told her to pick whoever and was happy to see her redition of BoBo. She said it was a tough choice on who to draw and she wanted to do either Julia or BoBo, but decided on BoBo because she thought she was unique. I really love her interpetation of BoBo. I think I'll try to get more sketches from Amanda in the future. Pretty cool, huh?
Posted by Rich B. at 2:38 PM 2 comments: 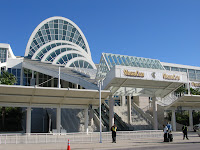 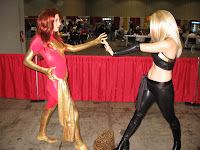 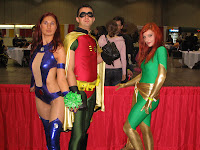 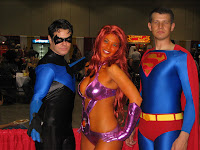 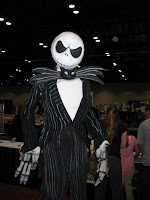 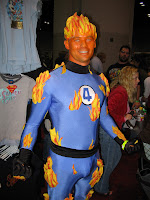 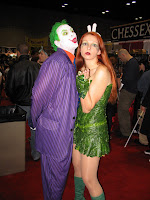 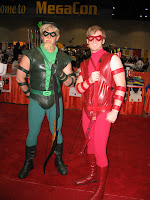 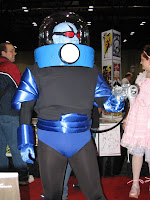 So, we've returned from Megacon! I had a great time there and got the chance to meet a ton of people. I want to thank Jamie, Todd, David and Andrew for all their help and support. It was also great meeting old and new readers (Charlie, thanks for the pics!).
Megacon was super big! I haven't seen this many people at a con outside of San Diego and NYC. I'm not sure when I can make it back, but I definitely will try soon.
The first day there was a little slow, but Saturday and Sunday the con rocked. Tons of people and lots of them in costumes. I've attached some pics in this post to see some of the great ones.
Overall the reaction to the SENTINELS Anthology was great. Readers seemed to be interested in the 3rd Gen and liked the idea of different writers and artists doing solo stories on the 2nd Gen.
A few of the highlights for me at the show were getting to meet Todd and Andrew, who both contributed to the Anthology. Getting the chance to chat with follow self-publishers Comfort and Adam (their book The Uniques is great and I'll spotlight it soon). Hanging with the Comic Geek Speak guys and chatting with Kristy Swanson (lol, if you call it chatting when someone is that drunk). Talking with Joseph Michael Linsner, the creator of DAWN, and him saying he was impressed with what I've done. He even gave me some free comics! And last, but not least I got an awesome sketch by Amanda Conner which I'll post soon.
Again, thanks to everyone who helped make this con a success!
Posted by Rich B. at 4:54 AM 2 comments: 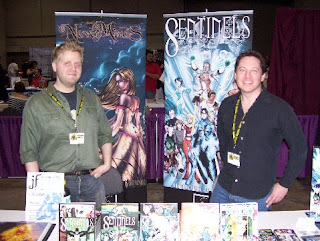 Still in Orlando here, but I wanted to post a quick report on how the con went. Overall it was a really fun convention. I got the chance to meet a lot of great people and sold a fair amount of books. I got a great commission from Amanda Conner, that I will post when I get back. I also have a funny Buffy the Vampire Slayer story, but I don't know if I want to tell that on here, lol. I want to thank everyone who helped out this weekend. I really appreciated your support. When I get back from Florida, I'll do a full report. But in the meanwhile, check out the awesome plug we got from Todd Latoski on Newsarama http://forum.newsarama.com/showthread.php?t=149545 . The above pic is from the story. Lots more soon........!
Posted by Rich B. at 7:15 PM 2 comments:

This week the SENTINELS Anthology will premiere at the Florida MEGACON on March 7-9! I'm really excited for this convention. I've never attended this one before and hope it's going to be as good as everyone says. Three of the creators involved in the Anthology will be there; Jamie Fay, Todd Latoski and Andrew Charipar. I'll be selling all four SENTINELS books and the Anthology. Jamie and I will also have previews of NEVERMINDS. Jamie and Andrew will be doing sketches and Andrew will have TALES FROM THE CORNERSTONE with him at his table. It's going to be a blast! Stop by and say hello.