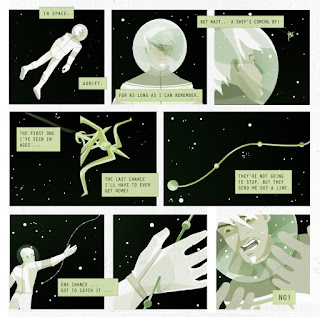 I met Josh a few years ago and was immediately impressed with his work and love of comics. Josh (Rogan Josh) is an incredible artist whose style is unlike any other comic work I’ve seen before.  Using what he has coined as “modHero” style, his work is very graphic and designed with extreme consideration to positioning and color. His figures, backgrounds and symbols are bold and pull you into his work immediately.  His work has been featured in many galleries and most recently at the Brooklyn Children’s Museum.
After that initial meeting, Josh read the entire SENTINELS series and told me he really enjoyed it! At the time, I wasn’t really planning on doing another Anthology (just yet), but Josh asked that if I ever did another one, he could be involved. I was curious and asked what he’d be interested in doing and Josh said he already had an idea for a story for Phazer! I was sold on the idea very quickly and with that, Josh kicked off the beginning of the second SENTINELS Anthology! 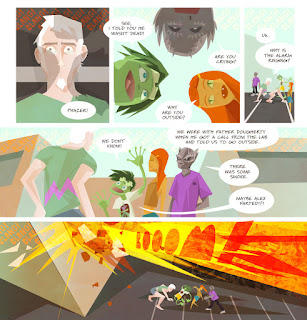 Josh’s story for Phazer really captures the character. It was important to me that someone who cares about the character and understands him spotlighted Phazer. Phazer has a lot of supporters and represents the LGBT community in a positive way since he was introduced over 10 years ago. He’s also a role model for the 3rd generation SENTINELS. As the co-founder for GeeksOut, a nonprofit organization that represent the queer geek community, I knew Josh would do an amazing job on Phazer’s story and handle him perfectly.
Josh’s story for Phazer is also significant because he did all of the writing and art for the story himself! And you won’t believe it once you see his work, but this is Josh’s first sequential comic story ever! And to say he hit the ball out of the park is an understatement. Josh went above and beyond for this story and I can see this is just the beginning of his sequential work (at least I hope so!).
I’m proud to have Josh involved in the SENTINELS Anthology and I hope everyone reading this will check out more of Josh’s work at www.modhero.com and order the second SENTINELS Anthology at: http://www.freewebstore.org/DrumfishProductions/SENTINELS__ANTHOLOGY_2/p1777237_14809770.aspx
Posted by Rich B. at 1:10 PM No comments:

Holly Mongi is an amazing artist who’s work I originally saw at the first NYCC Anime Show over 5 years ago. I was immediately impressed by the beautiful watercolor technique Holly used on her art. I’ve never been an artist who was able to grasp watercolors very well. I’m just not good at it. But when you see Holly’s work, she makes it look so easy! Her work stood out from everyone else’s at the show. It also helps that Holly has an animation background and her character drawings are so fluid and full of movement. I can’t say enough great things about Holly or her work! Over the years, I’ve been lucky to get some excellent commissions from her in my sketchbook. That’s why, when we began working on the second SENTINELS Anthology, I made sure to get her involved!
Holly drew Electro-Cute’s story in the Anthology and found a very creative work to work a lot into just one page. The story is touching in a way I didn’t expect and Holly’s sensitive art style makes it all the more special. Written by Todd Latoski, Electro-Cute’s story is another great example of what two creators can do when they collaborate so well!


Did I mention how insanely busy Holly is?  Not only does she work as a lead animator at an educational video game company, but she also has her own graphic novel, Aviary, that she is working on! I love the story so far and hope people check it out at www.aviarycomic.com . But the biggest project Holly has right now is as a proud new Mom to a beautiful baby!
Posted by Rich B. at 11:24 AM No comments: 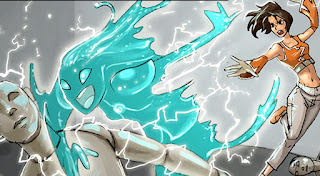 I've been friends with Todd Latoski for a number of years now and it's been a pleasure reading his work during that time. He's also been a big help to me every year I attend Megacon in Florida.
Todd is one of the few returning creators from the first SENTINELS Anthology that contributed to this second one. For the first Anthology, Todd wrote a great story about Electron and how he discovered his powers. So, I thought it was only fitting that he would write Electron's sister, Elena's story for this new one. Todd was one of the first creators to get their work completed and I loved the idea he came up for Electro-Cute. It was perfectly in character and fits into the larger story in the book where we see Elena as an adult. Illustrated by the amazing Holly Mongi, I think the story is touching and shows a softer side of a character that's usually portrayed as tough. But that's no surprise to me, because I've always been a fan of Todd's writing. In fact, I've very excited to read the printed version of his first original graphic novel, which he hopes to have out soon! It will be just the first in a series of children's mystery stories that I know people will love! Todd has been working on the book for a while now and speaking from experience, I know how hard it can be to get your first project out there, so I can't wait for him to start sharing the book in previews for the public!


When he's not writing his mystery novels, serving as the editor of Sleuth magazine, or writing reviews and reporting on Megacon, Todd can be found acting! Over the last few years, Todd has gone from few line character roles, to being the lead in some productions! Congratulations, Todd! I hope to catch one of his shows next time I'm in Florida for Megacon.
Posted by Rich B. at 10:52 AM No comments: