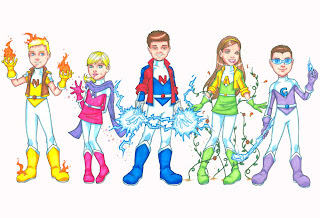 I hope everyone has a Happy Holiday this week. I thought it was appropriate to post this commission I hired Jamie Fay to do. It's the kids in my family as superheroes. I thought it was a good idea and the kids loved them when they opened them. Each of them got their own individual character and Jamie put them all together using photoshop for me. Pretty cool, huh? The image is not the best scan and the actual drawings are much more vibrate and the black pop out more. But I wanted to post this show anyway. Happy Holidays!!!
Posted by Rich B. at 8:51 AM 4 comments: 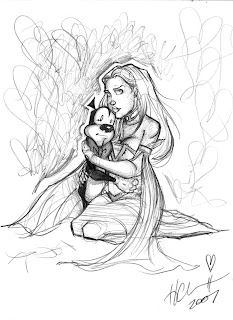 I can't believe it's almost the end of the year. It feels like just yesterday that I was announcing the release of the SENTINELS Anthology, lol. Of course, I had hoped that we'd be close to having NEVERMINDS complete and ready for release soon, but we hit a few bumps in the road and are still working on it. I also finished writing another OGN over the summer that is being drawn by Teyo (the artist on Templar's story in the SENTINELS Anthology). But Teyo had an injury that has delayed him a bit. Then there's that CASPIAN CURSES book I mentioned a ton of times that Luciano Vecchio and I am planning to do. Luciano just has to find an opening in his schedule.The guy is in demand.
So, even though it's been a while since anything new has come out, I think in the long run this will all be for the best and the end results will be great. I've never been one to rush just to get something out. I prefer quality over quantity, lol. I see a lot of Indy creators just rushing to get something new done for each con they go to and I can look at the quality of there book and see it looks bad. Issue one might have looked great, but then you see their issue five and see no progress in art or design. It's stagnant. That's not how I want people to feel about anything I publish.
I'll keep posting info and previews as I can. Sorry for the delay!
In the meanwhile, here's a sketch done by Howie Noeldechen of Alanis from NEVERMINDS and Howie's creation, Mr. Scootles. Anyone who's read this blog knows I'm a BIG fan of Mr. Scootles, so I love this sketch. The first Mr. Scootles trade just came out recently and I even wrote the intro for it. The book looks awesome and I highly recommend checking it out at http://www.hcnoel.com/ .
Posted by Rich B. at 10:28 AM 4 comments: 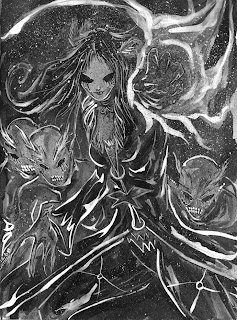 It's not often that I get a sketch by an artist twice in my sketch book, but knowing how much I loved the last sketch David Quiles did for me, I had to get another from him. This time he drew Lady Nimue, one of the villains from SENTINELS Book 2: Masks. I really love his rendition of her. She looks so dark and creepy. And he even drew a few of the demons in there with her.
David has worked on such titles as BAREKNUCKLED FIGHTER and THE UNTITLED. You can see more of David's work at www.comicspace.com/davidquiles and http://www.infinitelinecomics.com/ .
Posted by Rich B. at 8:31 AM 4 comments:

JAMIE FAY HAS A BLOG 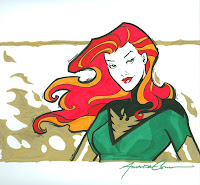 Jamie Fay, artist on NEVERMINDS and Firebomb's story in the SENTINELS Anthology, has gotten himself a blog. Jamie says he plans to show sketches and artwork on there as well as commissions he's gotten from other artists. Jamie has a pretty sweet collection of art so I'm glad he's finally posting some of them and sharing them with everyone. Check out Jamie's blog at: http://www.jamiefay.blogspot.com/ . With this post is one of the many commissions Jamie has. Gotta love Amanda Connor.
Posted by Rich B. at 11:10 AM 1 comment: 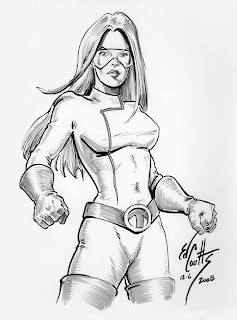 This drawing of Terrace was done by Ed Coutts. What's that? Who's Terrace? lol. Well, this sketch should make Ryan McLelland and Andrew Charipar pretty happy. Terrace made her first and only appearance in the SENTINELS Anthology. She was the villain who fought Serpenta and happens to be the only character in the SENTINELS universe that wasn't created by me. She's all Ryan and Andrew's baby. I thought it was pretty cool that Ed picked Terrace to draw. It continued the villain sketches theme that seemed to be happening at the Big Apple Con. Ed Coutts was a very nice guy and super fast. Ed is an illustrator who works in pencil, inks and paint. He is very well know for his "good girl" art and has done covers and interior pages for AC Comic's FemForce as well as numerous other publishers. Check out Ed's website at http://www.edcouttsart.com/ .
Posted by Rich B. at 11:43 AM 4 comments: