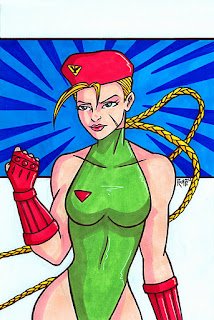 Here's a character I'm not really familiar with and to be honest, I wasn't planning on drawing, lol. But, since I didn't know much about this week's theme on Illustrious Bits of Cammy from Street Fighter, I figured I'd look her up and draw her since it was a challenge. I also have to be honest and say that her costume is almost worse than Psylocke from the X-Men, lol. What woman would wear the outfit she does (and you have to see it from the back to understand that, lol) and be able to fight? Still, she was fun to draw and I did my best not knowing what her personality was like.

UPDATES AND WHAT'S BEEN GOING ON! 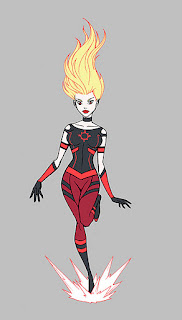 I thought I’d give a few updates on what’s been going on.
NEVERMINDS #2
We had originally hoped/planned to have this issue done by last year’s NY Comicon. Unfortunately, that didn’t happen due to a number of reasons. But, Jamie Fay and Danielle Alexis St. Pierre are kicking butt with the pages and are hoping to finish in time for the 2012 Pittsburgh Comicon on April 20-22. Fingers crossed!!
BUGGED
Yes, it’s been almost three years since I first mentioned and began this graphic novel. To say it’s been killing me not having it out yet is an understatement. Believe me, it’s driving me crazy not having it complete yet! The artist on the book, Teyo, is doing really amazing work and I believe everyone will be impressed. The book should be done in the coming months and that would mean it will be out in the summer. Fingers double crossed!!
SENTINELS ANTHOLOGY #2
I mentioned a few times that we were toying with the idea of a second SENTINELS Anthology and hoped to get it started soon. We’re definitely doing it. For this one, we’re doing a few different things that I don’t want to mention just yet, but be sure that the book is being worked on and I already have some truly amazing art to show soon. Stay tuned!
SENTINELS RE-VISIONED
I’ve mentioned on here a few times about the possibility of re-publishing SENTINELS in color. We’ve had a few companies interested, but then things didn’t work out. We haven’t given up hope yet though and SENTINELS artist, Luciano Vecchio, is still re-working and coloring pages when he has free time (which isn’t often as he’s a busy guy and in demand!). But this project might be a way off and not this year.
DRUMFISH STATUES
These are definitely happened and being made as I type!! I should have the prototypes soon and will post them here and on the Drumfish Facebook page when I have pictures. As I mentioned, we’re doing TWO statues. One from SENTINELS (Firebomb) and one from NEVERMINDS (Alanis Munroe). We’re only doing a limited run on these and hope they sell well enough to do other characters. (Suggestions?) The statues should be ready in time for the 2012 Pittsburgh Comicon and we’ll post ordering info soon.
NEW DRUMFISH WEBSITE
This is still being worked on. This year for sure though.
WEBCOMIC
This is my solo baby and yes, it’s been taking me a while to get to this. I couldn’t decide on what type of webcomic I wanted to do, but I’ve found something I really like. I’m still developing the characters and story and want to have as much as I can worked out before I start showing things. I’ll be writing and drawing this, so I want it to be good!
COMMISSIONS
Yes, I actually do a few of these, lol. For a while, I stopped, but now I’m willing to open up my at home commissions. Just send me an email or drop me a note with requests. (I know some of you have written and I will reply today!) There are certain things I won’t do and there are certain things I don’t think I’m good at and would be best for another artist, but I’m open to doing some commissions again. So, let me know.
DC COMICS
And finally, lol, last year I was fortunate enough to get asked to write something for DC Comics. It was a short ten page story for their Cartoon Network Action Pack comic (the same comic that SENTINELS artist, Luciano Vecchio did a few issues of) and was a story on Generator Rex. I had a LOT of fun writing the story and even got to create new villains for the book. The story was drawn, finished and even scheduled to be printed in issue #68. Of course, with luck like mine, lol, the book was cancelled with issue #67. Oh well, what can you do? I’m happy to at least have had the opportunity and to have done something I was proud of. I still got paid at least, lol.

There are a few other things in the works, but those are the main projects. Be patient with us, working full time jobs makes it difficult to get things done as fast as other creators do. But our passion to get these things out there to the masses is just as great. Thanks to anyone still checking in here for hanging with us!
Posted by Rich B. at 6:05 AM No comments: 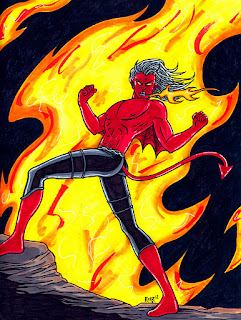 I've been a bit behind on my commissions and just now have caught up. This sketch of Kid-Devil was for a huge Titan fan who has been waiting a while for it. (Sorry!) Hopefully, the wait was worth it and they like how it came out. Pencil, inks and Prismacolors. 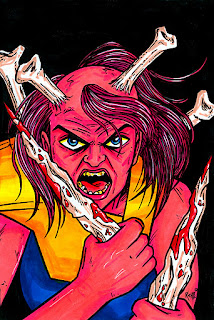 Here is my contribution to Week 9 of Illustrious Bits. This week the character choice was picked by Ross Campbell and is Marrow from the X-Men. I decided to draw her in her original nasty evil look. Special thanks to Jamie for posing for this (just kidding, lol). 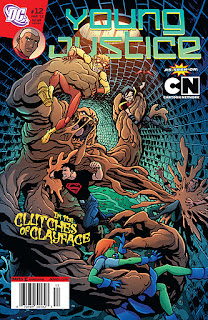 Over the last two weeks, TWO DC Comics titles came out that were drawn by SENTINELS artist, Luciano Vecchio!!! Last week saw one of the last issues of DC's Cartoon Network Action Pack come out and it has a Ben 10 story in it drawn by Luciano (it's issue #66!) and this week Young Justice #12 came out drawn by him. Please check out both titles at your local comic store and see a preview of Luciano's Young Justice here.
Posted by Rich B. at 6:14 AM No comments: 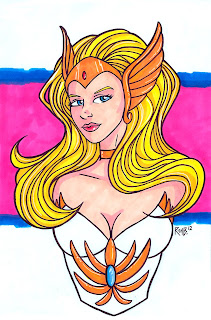 Here's my submission for Week 8 of Illustrious Bits. The subject this week was picked by fans over at Deviant Art and it's any character from the animated series, She-Ra. Since I really don't know much about this series or any of the characters except She-Ra, I decided to draw her. Fun character to draw! 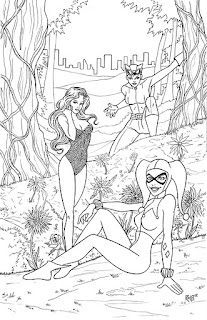 I wasn't sure I'd get this version done, but this is my original version of what I planned to do for week 7 of Illustrious Bits. I'm not wild about the background though. I actually imagined it a little differently, but this is how it turned out, lol. I hope to get it colored soon and make it into a print to sell at conventions.
Gotham Sirens, Catwoman, Harley Quinn and Poison Ivy © DC Comics
Posted by Rich B. at 4:51 PM No comments: 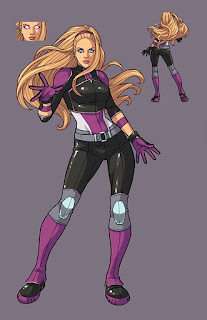 A while back I posted that we were thinking of doing some statues of some of the SENTINELS characters and that a place called Patchtogether was interested in doing them. Well, that fell through completely, lol, BUT we approached recently about doing statues by another company. We switched things up a little and decided to submit two designs, one character from SENTINELS (Firebomb) and one from NEVERMINDS (Alanis Munroe). Hopefully, we'll have news soon on these and maybe even a prototype to show. Here are the designs of what the statues will look like! 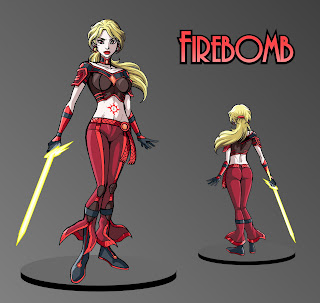 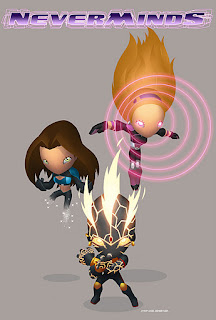 Check out these awesome "clunk" versions of the ladies from NEVERMINDS drawn by King Bola. A talented artist from the Philippines, King Bola, was commissioned by Jamie Fay (artist on NEVERMINDS) through Deviant Art. I've seen many different styles that are influenced by Manga that use similar techniques, but King Bola's "clunkworld" renditions of characters really are unique. Check out the detail he puts in and still makes the characters look stylized. I think King Bola could really be on to something with his technique and I hope to see him get his art out into the mainstream more! Please look at more of King Bola's work at http://clunkworld.deviantart.com/ .
Posted by Rich B. at 6:40 AM No comments: 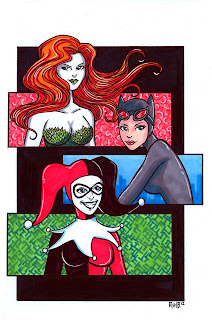 So, week 7 of Illustrious Bits is my pick of any Batman villain. I originally hoped to finish a full figure drawing of the Gotham Sirens, but since I've been away for a week, I haven't gotten it done yet. I didn't want to rush it and I actually still might finish before the end of the week. But just in case, lol, I did this quick headshot type version of the Gotham Sirens, so I didn't miss out on my own week. :)

Gotham Sirens, Catwoman, Posion Ivy and Harley Quinn (c) DC Comics
Posted by Rich B. at 7:06 AM No comments: