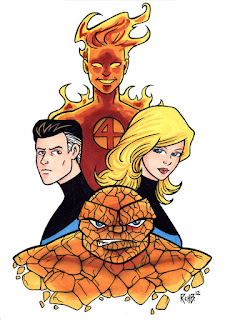 Here's my entry for week 40 on Illustrious Bits! The theme for this week was any character from Fantastic Four. I couln't decide on just one member though, stop I decided to do all four of the original. :)

Fantastic Four (c) Marvel Comics
Posted by Rich B. at 10:43 AM No comments: 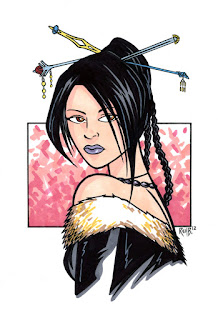 Here is another late post on a sketch from Illustrious Bits for week39's theme of "any character from Final Fantasy". I honestly don't know anything about Final Fantasy, so I picked a character that I found interesting visually. This is Lulu is from Final Fantasy X and specializes in the art of Black Magic, using various dolls to help cast spells. 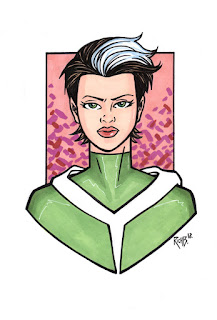 I'm really late posting these last few submissions for Illustrious Bits on here. But this is my submission for week 38's theme "any character created by Chris Claremont". Originally, I planned to do my Classic X-Men collage for this, but I realized after I finished that Claremont did not create every character I drew. Luckily, I did all of the art in pieces and individually.
So, I decided to color Rogue and use her alone as my entry for week 38.

This is just a reminder that I'll be at the New York Comicon (NYCC) this weekend along with the creative team from NEVERMINDS, Jamie Fay and Danielle Alex St. Pierre. We'll be selling comics, figurines, prints, original art and taking commissions at the show! Please stop by and say hello! We'll be in Artist Alley at tables N12 and N13! Hope to see you there! 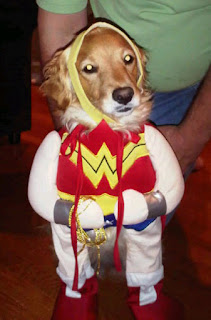 And just to give everyone a laugh, here's my poor puppy, Harlee, in a costume bought by my sister hoping she would get to go to comicon.  :P
Posted by Rich B. at 4:43 AM No comments: 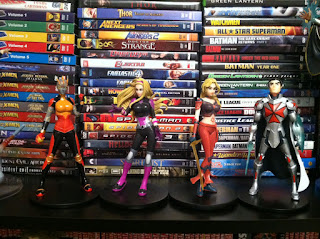 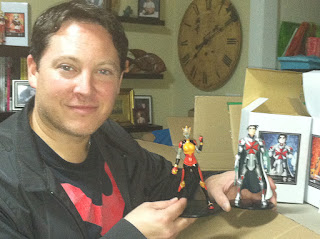 The second set of Drumfish Production figurines have arrived! Samanya from NEVERMINDS and Templar from SENTINELS look AMAZING! We're very proud of these statues and are excited to have them for NYCC this weekend. Each are $40 and we will be selling them at the show and also online. Note us if your interested in getting one or all! 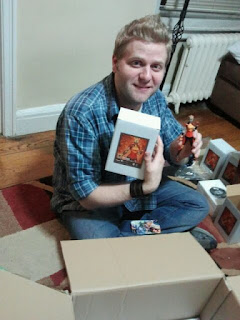 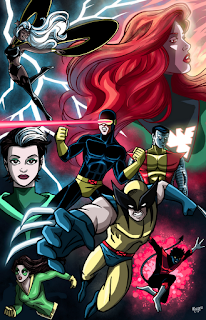 Here is the latest print that I've done just in time for this week's New York Comicon! I had a poll on my DeviantArt page and asked followers what I should draw for my next print and a majority of them voted for the classic New X-Men team by Claremont and Cockrum. I really love that era and the characters are some of my favorites, so it was easy to get into drawing it. I decided to add Rogue in there as she joined shortly after and I wanted another female character in the picture. I was lucky to have NEVERMINDS artist, Jamie Fay, help me put this all together in Photoshop (I drew each character seperately this time) and then lucky again to have SENTINELS artist, Luciano Vecchio, agree to color this for me! Thanks again, guys! 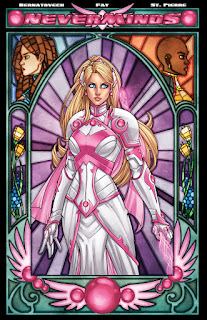 Lots of stuff is happening here!! Jamie Fay, Danielle Alexis St Pierre and I have been working VERY hard to get issue #3 of Neverminds done for the show. And it's at the printers now. So, fingers cross that it looks as amazing pritned as it does on the computer screen. Jamie and Danielle really stepped it up a lot and have done the best work I've ever seen from them. Honestly, it's the best issue yet. We'll be premiering the book at NYCC (the New York Comicon) this week! 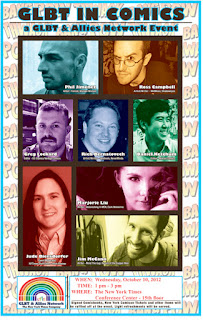 Right before the big NYCC show, I'll be on a panel at the New York Times. It's a diversity event for the GLBT and Allies group. They'll be discussing GLBT characters in comics and since they spotlighted Phazer from Sentinels earlier this year, they asked me to take part. It's also interesting timing as with the latest issue of Neverminds, we reveal that team member Samanya is a lesbian. It's really great to see that she is such a fan favorite and I hope this makes her even more unique and interesting to people. She's one of my favorite characters.

I'll be in Artist Alley at NYCC at tables N12 and N13 along with Jamie and Danielle. We have lots of books, prints, the figurines and original art that we'll be selling. If you're at the show, please stop by and say hello!
Posted by Rich B. at 6:12 AM No comments: 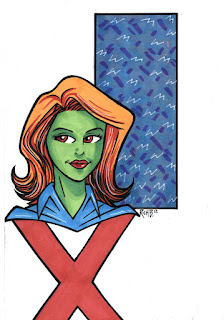 This week's theme on Illustrious Bits was any character with green skin. I actually picked this week's theme and intended to do a few different characters. But this being the week before the 2012 New York Comicon (NYCC), I have a ton of things to do and was only able to get one sketch done. I decided to draw Ms Martian from Teen Titans (and later the Young Justice cartoon). Not wild about the background pattern I did and this was kind of a rush sketch. 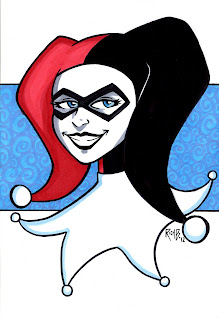 The latest theme on Illustrious Bits was "Catch-Up Week", menaing revisiting any of the previous week's themes and drawing something from them. I decided that I was going to do a bunch of Batman villains, since I sell a lot of those character sketches at conventions and NYCC is coming up fast! But with eveything I've had going one recently (just returned from Italy, trying to get NEVERMINDS #3 finished and get the two new Drumfish figurines back in time for NYCC), I was a little too busy to get many done. Still, I got two of the more popular characters done. Here are Harley Quinn and Poison Ivy. Love these ladies! 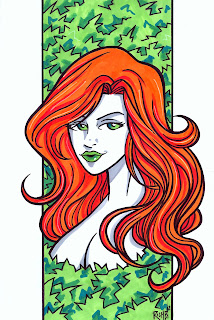