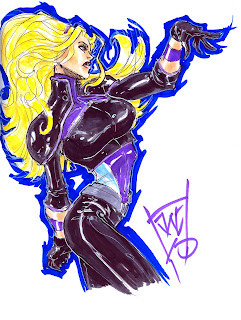 Here is the last of the sketches I got at the 2010 Baltimore Comicon. John Watkins-Chow did this awesome rendition of one of our main characters from NEVERMINDS, Alanis Munroe. I really love the energy John puts into all the characters he draws. They have a lot of life to them. The coloring only helps to enhance that. And, of course, he draws very good looking ladies! On top of all that John is super nice and fast with his sketching. I think he did this within an hour. Check out more of John's work at www.watkinschow.com .
Posted by Rich B. at 4:56 AM No comments:

I promise not be one of those people who constantly posts pictures of their puppies, but I had to share photos of my new pup. She's kinda Drumfish's mascot, lol, so it fits to post her here. Here's Harlee, newly arrived and 8 weeks old. She's a miniature Golden Retriever. Adorable, huh? :) 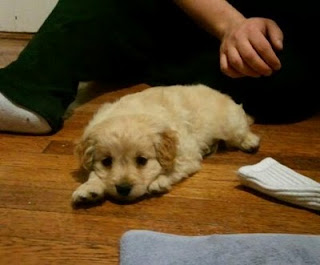 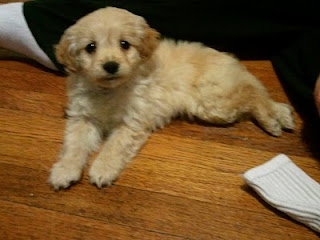 I've been catching up on work and projects, so I haven't been posting so much. But I will soon! Meanwhile, here's a few new sketches I did. I'm trying to do characters that people like and bought at previous Cons. 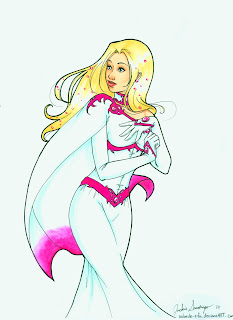 Here's a another of the awesome sketches I got at the 2010 Baltimore Comicon. Alanis from our new series, NEVERMINDS, was drawn by Jackie Santiago. I really love Jackie's soft style and portrayal of female characters, so it was a no-brainer to have her draw one of the leads from NEVERMINDS. I think she did an incredible job and I love her clean line work too! Check out more of Jackie's work at www.volatile-tifa.deviantart.com .
Posted by Rich B. at 5:46 PM No comments:

Wow! What a week. I still haven't caught up on my sleep from last week's NYCC. To say it was busy would be an understatement. I actually think it was one of the busiest conventions I've ever been to, outside of the time I went to San Diego and had a table there with Luciano Vecchio. After the convention, I had to go straight back to work, so my sleep was really all over the place. That's why I haven't written on the blog all week. But now, things are getting back to normal, so I will be posting more soon. We really had a great time at the NYCC, there were so many people there I know there's no way to mention all the great folks we met and talked to. But I want to thank them all for stopping by. We truly appreciate the support!
Of course, there was one slight disappointment in that we were not able to get the first issue of NEVERMINDS back from the printer in time for the show. It sucked, but we did have all the pages there for people to see and got some orders. We'll be posting news soon on how to order the first issue or download it.
I also sold a lot of SENTINELS books at the Con and even had to go back to get more on Saturday. It was great! Jamie Fay was doing his usually commissions and busy, busy, busy, but the big surprise was that I got commissioned to do two sketches. Lol, what were they thinking? Seriously though, it was really great to do them and I had a blast. I also sold more of my art then ever before.
We also made some great contacts at the show and I can't wait until things get moving on the projects and I can share some of the stuff we have planned. For now, I have to stay mum on everything though.
Usually, I get a bunch of sketches of different SENTINELS or NEVERMINDS characters at conventions, but it was so busy, that I barely got any this time. I will post the few I got on the blog soon. But if you want to see them early, go to our the Drumfish Productions Fan Page on Facebook and hit the like button. We often post things there first, so become a fan and get to see stuff earlier. :)
Here's the link again: http://www.facebook.com/pages/Drumfish-Productions/117660288272651
I want to thank all the great people we met at the Con again and say hi to all our old friends who stopped by and chatted. You guys are the best!
Posted by Rich B. at 7:58 AM 4 comments:

It's been a busy, busy week! I'm still recovering from NYCC and going right back into work, but I hope to post a convention report tomorrow. For those who didn't see this page on the interview we had on Comic Related or on our Drumfish Fan Page on Facebook, here's another preview page from NEVERMINDS! 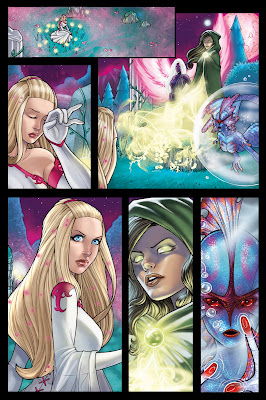 I'm proud to announce that Jamie Fay and I were interviewed by COMIC RELATED about Neverminds. I know we've kept everyone in the dark about the series, but its all out there now for you to read. We even have some pages and promo art on there as well. Take a look:

We talk how we met, how the idea of N about everminds came about, character creation, and more importantly, the ways you can get it into your hands. We'll be selling it as single issues and pdfs. After each arc, we'll also be collecting them as trades, which SENTINELS' was one of the pioneers for Indie books.

So read it. Let us know what you think and definitely leave a message over on COMIC RELATED as well.

This weekend I'll be at the New York Comic Con along with Jamie and Rey. We'll be showing off our upcoming book, NEVERMINDS!! Jamie and I will be in Artist Alley at table E-12 and Rey will be at C-16.I'll also have all 5 of the critically acclaimed SENTINELS graphic novels there and we're doing a deal if you buy all 5. I recommend getting them soon though, as our stock is starting to disappear.
Along with the SENTINELS books, I’ll also have copies of my sketchbook and our collab comic COMICON ON MONSTER ISLAND.And lastly, lol, I’ll be selling colored sketches (like the ones you see in my gallery and some examples below here) for $10 each (what a deal, huh?) and doing limited commissions. I’m looking forward to seeing everyone again. This is our home town and one of our favorite conventions of the year. It's going to be insanely busy!!!!And, since we promised more previews of NEVERMINDS..... 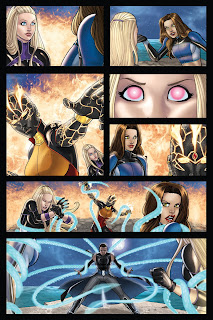 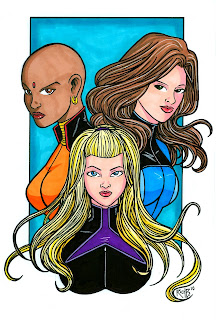 It's been a while since I posted any new art that I've done. We've been super busy trying to get NEVERMINDS finished and though I don't like to talk too much about my personal life on here, I got a MAJOR promotion at work. Needless to say, my time has been extremely limited and I appologize that I'm not posting more regularly. I hope to get back into the groove soon. I think once the NYC Comicon is over, things will get back to normal. Lol, I hope. Anyway, even though my art doesn't compare to the AMAZING work Jamie and Rey are doing on our NEVERMINDS book, I wanted to try my hand at the three main characters. Here are Samanya, Alanis and Nina. I gotta work a little on my Nina (the brunette), she doesn't feel just right to me. Totally fun to draw these characters for the first time!
Posted by Rich B. at 10:28 AM 3 comments: