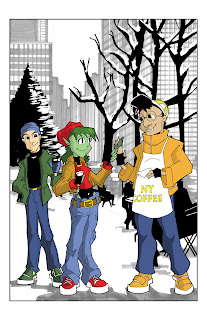 Andrew Charipar is the artist on Serpenta's story for the SENTINELS Anthology. I met Andrew last year at the 2007 NYC Comic Con when he stopped by my table and started asking about self-publishing. I'm always happy to talk to other self-publishers and chatting with Andrew was a blast. We immediately hit it off and by the end of the talk, he handed me his trade of TALES FROM THE CORNERSTONE. I was totally impressed with the amount of work Andrew had put into his book and was even more impressed that he had written, pencilled and inked the entire book himself. The book was a great mix of humor and mystery and I ended up reading it as soon as I got home. For the next couple of weeks we traded e-mails and before I knew it Andrew had agreed to work on Serpenta's story for the SENTINELS Anthology.
Andrew grew up all over the U.S. as his father was in the Navy and they moved around a lot. Settling in Jacksonville, Florida, Andrew attended the Douglas Anderson School of Arts High School where he perfected his talents. A mixture of cartoon and energy, Andrew's art really surprised me in it's style. I loved that he mixed his art with real-life photos and created an enviroment that worked so well. When I received Ryan's story for Serpenta, I knew Andrew would do a kickass job on it.
Another great thing about Andrew is he's amazingly fast. He was the first artist finished with his story and had been drawing 300 sketches for the Comic Geek's 300 podcast party at the same time. And on top of all that he had a full time job and a family to take care of. I have no idea when he slept!
Like I've said about all the other creators involved in the SENTINELS Anthology, I'm extremely impressed with Andrew's work and see great things in his future. His comic TALES FROM THE CORNERSTONE is a great book and he's currently completing the second volume. Check it out at http://www.misfitcorner.com/ . You won't be disappointed!
Posted by Rich B. at 4:59 AM

Glad you guys like Andrew's style. His book is very funny and I'm a big fan of it. I think you can order it through his website or wait and I think it's supposed to be solicited through Diamond soon. Also, he's planning on being at the NYC Con in April as well as Megacon in Florida and Pittsburgh.

"he's planning on being at the NYC Con in April"

Well that solves that problem :)

Yeah, I'm pretty sure that's what he told me last time we chatted. I will see Andrew in Florida in March, so if he doesn't plan to make it to NYC I'll pick up a copy for you if you want.

If he doesn't make it to NY yeah please do. If it's going to be solicited through Diamond soon though i might just order it through the store. I'll let you know.