SENTINELS ANTHOLOGY #2 AT THE PRINTERS! 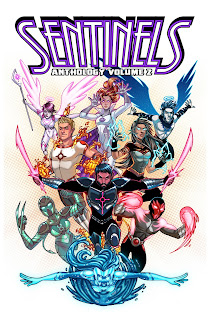 A year ago I began doing creator spotlights on all the talented people involved with the second SENTINELS Anthology. At the time, we were on track to have the book completed for the 10th year anniversary of the SENTINELS first release. Unfortunately, we had some problems and the book took a major delay. Here we are a year later and the book is honestly at the printers!! We expect to have the book in time for NYCC next month and I thought it was a good time to start doing the creator spotlights again. I did four before I stopped, but I’ll repost those in all fairness, so that they are included in round too. So, starting tomorrow, we’ll be introducing some of the amazing folk we got to work with on this book. I can’t wait for you too see how awesome the second SENTINELS Anthology looks!
Posted by Rich B. at 10:27 AM