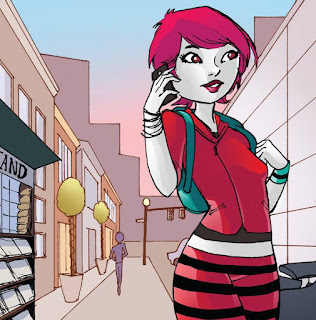 What can I say about Penelope that hasn’t been said before? Not much, because she’s amazing, super nice, talented and kickass; and everyone already says that about her. I’ve known “Peng-Peng” for a long time and I honestly can’t even remember when I first met her and the rest of the ID Comics artists. And that’s because, once you meet them, they make you feel like you’ve know them for years. Yup, they’re all that cool. So, when it came time to get artists for the second SENTINELS Anthology, I knew I wanted to have as many of the ID Comics creators involved as possible. With a soft and cute style, Penelope was the perfect artist to draw Heartache’s story (written by Marcus Mebes and colors by Gabriel Cassatta). In just a few panels, she expressed Heartache personality perfectly. And wait until you see how much detail she got into her panels!
Penelope is currently working with Acme Archives to produce limited edition illustrations. She's done exclusive cover art for "Adventure Time with Fionna and Cake" (Boom Studios), "My Little Pony" (IDW), and "Soulfire" (Aspen Comics). She's the inker on "Fanboys Vs. Zombies" (Boom Studios) and the mini-series "Loki:Ragnarok and Roll" (Boom Studios). She has also worked on the LEGO adaptation of "Teenage Mutant Ninja Turtles" (IDW) as a letterer. She has done several sketchcard sets for Cryptozoic, Upper Deck, and 5Finity Productions. She is a member of Girls Drawin Girls - a group of professional female visual artists from around the world.
-Whew!
See what I mean? Who runs the world? Peng_Peng
Follow her on Twitter - @peng_peng - and on her website at www.PengPengArt.com
Posted by Rich B. at 6:40 PM