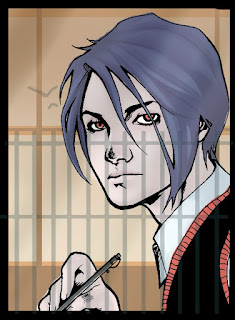 I can still remember meeting Keefer Kopco for the first time at Pittsburgh Comicon many years ago. Back then he was a little kid who seemed smarter than he should be and who had a cool Aunt who took him to comic conventions. That first meeting, Keefer wanted to buy the first SENTINELS graphic novel from me, but I wasn’t sure he was old enough to read it. I was hesitant to sell it to him. But, eventually, after some reassurance from his costumed Aunt, I did end up selling Keefer the book. The rest has been a nightmare, I mean…uh, a great experience. Seriously though, it was a pleasure going back to the Pittsburgh Comicon each year and getting schooled on comics (and even on my own series) by a teenager! Keefer knew his comics and became a big fan of SENTINELS. Over the years, I was proud to see him grow into a great guy, graduate college and become a friend. For a while, Keefer was even helping us with all our Drumfish Productions social media stuff and gave me a quick education on it!
So, when it came time to gather creators for the second SENTINELS Anthology, I knew I wanted Keefer to contribute. Over the years, I got to read some of Keefer’s writing and I was impressed with his talent. I originally planned for him to write a story focusing on the first generation SENTINELS. And he wrote an amazing story for them! But as the book grew and changed, we ended up having to switch things around and I didn’t use Keefer’s first generation story. Keefer was very understanding with the change though and agreed to write Wickkid’s story instead. And Keefer didn’t disappoint with his interpretation of Wickkid! In just a few panels, Keefer expresses Wickkid’s feelings of darkness and sets a unique mood. The language of his story is true to the character and I feel it connects you his plight. Complimented greatly with art by Maya Cronvall, Wickkid’s story will leave you wanting to read more. Huge thanks to Keefer for all his help!! Keefer can be seen cosplaying and performing from Dr. Horrible’s Sing-Along Blog, at most Pennsylvania Comic Conventions!
Posted by Rich B. at 1:11 PM